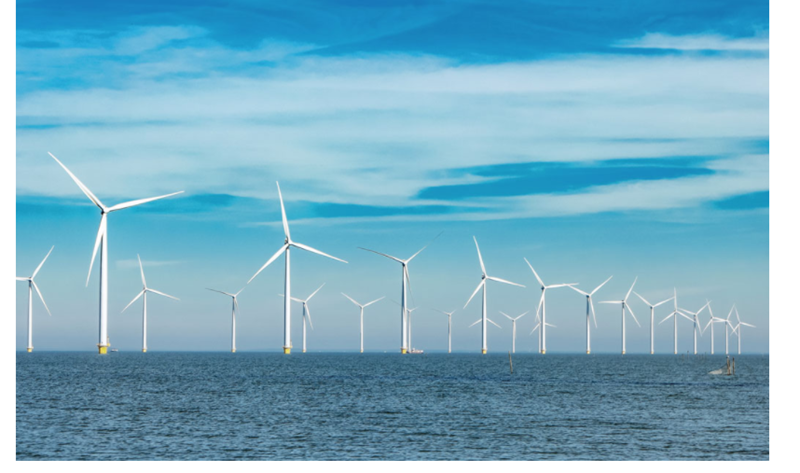 Seven years after the first windmill was erected in Block Island, RI, most of the growth in US offshore wind has been focused on the Northeast and, increasingly, the Mid-Atlantic states.  But North Carolina is beginning to take a leading role as offshore wind becomes an increasingly significant source of renewable energy in this country.  While the leasing of offshore wind acreage is ultimately a federal decision, state leaders in North Carolina have expressed strong support for the development of wind energy off its coast and for the development of the supply chain industry required to support offshore development and operations.

In 2017, the US Bureau of Ocean Energy Management (BOEM) awarded the first wind lease off the coast of North Carolina to Avangrid Renewables, LLC to develop Kitty Hawk Offshore, for a 122,000-acre area located more than 27 miles east of Corolla, North Carolina and extending about 30 miles in a general southeast direction (the “Lease Area”). This past year, on July 21, 2021, Kitty Hawk Wind, LLC (KHW), a wholly owned subsidiary of Avangrid, submitted its Construction and Operation Plan (“COP”) to BOEM for the development of 40 percent of the Lease Area, and days later BOEM announced its intent to prepare an Environmental Impact Statement (“EIS”) for review of the COP.  BOEM expects to complete its draft EIS by September 2022, after which public comments will be received.  BOEM will review and respond to comments and has targeted June 2023 as the date when it expects to issue a final EIS.

If all goes as planned, BOEM will issue a record of decision (ROD) by August 2023 after which time construction could commence.  As proposed, the project will produce 2.5 GW, or enough wind-generated energy to power 700,000 homes. While North Carolina has set a goal of developing 2.8 gigawatts (GW) of offshore capacity by 2030 (enough energy for 2.3 million of the state’s 4 million homes) and 8.0 GW by 2040, this particular project is planned with 2 transmission cables making landfall in Virginia Beach, Virginia and to connect into the Pennsylvania-New Jersey-Maryland (PJM) Interconnection energy grid.

As such, more important to North Carolina’s residents is a second –proposed sale notice ("PSN") that BOEM recently issued for the Wilmington East Wind Energy Area (“WEA”). The PSN, issued on November 1, 2021, includes up to three commercial wind energy leases and includes nearly 128,000 acres that potentially may generate more than 1.5 GW of offshore wind energy—enough clean, renewable power for more than 500,000 homes in North Carolina. In December 2021, BOEM published a draft Supplemental Environmental Assessment (“EA”), which modified an assessment conducted in 2015 and which addresses revisions to leasing area and modified the site characterization and site assessment scenarios.  This Supplemental EA concluded that for the site assessment stage of developing the WEA, impacts will be negligible to minor.

Prospective bidders were required to submit qualifications to BOEM by January 3, 2022.  The final Supplemental Environmental Assessment and Final Sale Notice was announced today along with the list of 16 qualified bidders:

The qualified bidders must now submit a Bidder’s Financial Form and a bid deposit to BOEM, after which BOEM will hold an auction for the lease area(s) on May 11, 2022.  Only after the winner of the lease sale is announced will the real work begin.  The winning bidder must assess the site and submit a COP for review.  Pursuant to the National Environmental Protection Act (NEPA), BOEM must review the COP, in consultation with other interested agencies, and prepare an EIS before any construction may commence.  The site assessment and COP process can take as much as 5 years.  If the COP is approved, construction can begin and may take 2 years to complete.

One other wrinkle that must be worked out for the WEA, is how energy from the turbines will connect to the grid.  Unlike KHW that can connect to PJM (a wholesale energy marketplace), interconnection access for WEA is in the exclusive territory of Duke Energy.  Thus any connection will require additional regulatory approvals and interconnection agreements with Duke Energy that may take additional time and expense to negotiate.

Although there is a long road to hoe before North Carolina may reap the benefits of offshore wind energy, the offshore wind industry itself presents the State with an opportunity for some real short term benefits.  According to the NC Department of Commerce, the state is ideally situated to become ground zero for the offshore wind supply chain industry. A March 2021 report issued by the Department of Commerce, Building North Carolina’s Offshore Wind Supply Chain Report, serves as a blueprint in fact for building an offshore wind industry in the Tar Heel State. The report notes the state’s competitive advantages, including:

To further its positioning as a home for supply chain resources, the state is working collaboratively with Maryland and Virginia on developing a regional program to support offshore wind development throughout the Mid-Atlantic and Southeast.

In 2021, North Carolina Gov. Roy Cooper announced the formation of NCTowers, the North Carolina Taskforce for Offshore Wind Economic Resource Strategies. The task force serves as an advisory group to Gov. Cooper and state lawmakers on issues relating to offshore wind. Their specific duties include:

NCTowers held its first meeting in February 2022. At that meeting, the task force reviewed the NC Department of Commerce Building North Carolina’s Offshore Wind Supply Chain Report, with a particular focus on positioning North Carolina as a leader in offshore wind manufacturing and supply chain issues. The report notes that the state ranks first among East Coast states and fifth nationally in the value of its manufacturing sector’s Gross Domestic Product (GDP). Among East Coast states, North Carolina also is the most manufacturing-focused, as measured by this sector’s percentage of the state’s GDP (17.2 percent).

While the state has set carbon neutrality targets, much of the focus of offshore wind development by state leaders has been on the industry’s opportunities as a job creator, leveraging the state’s manufacturing and supply chain resources. The Department of Commerce points to estimates of 85,000 new jobs and $140 billion in capital expenditures in East Coast offshore wind development by 2035.

“Time is of the essence when we’re talking about offshore wind. The earlier we can get into this industry, the more we can reap the benefits from it,” Gov. Cooper said.

Subsequent NCTowers meetings are scheduled for May, August and November.

“Time is of the essence when we’re talking about offshore wind. The earlier we can get into this industry, the more we can reap the benefits from it."

A Growing Pushback to Offshore Wind

As the push for offshore wind grows in North Carolina, it can’t be ignored that residents and representatives of coastal communities have expressed concern that such development could harm the state’s beach tourism industry and coastal property values. A BOEM supplemental report characterizes the impact on tourism of the two North Carolina offshore wind projects to be “negligible to minor.” But this has not convinced the skeptics.

The Brunswick County resolution states, in part, “Wind turbines located within the viewshed of Brunswick County beaches would damage tourism and the economy of the county by transforming open ocean views to views of massive industrial machinery.”

Bald Head Island Mayor Peter Quinn told WUNC Radio, “If you’re building something that’s in view, it’s going to affect our economy over on the island, and it’s going to affect our lifestyle.” Bald Head Island is approximately 15 nautical miles from the proposed Wilmington East Area development. Quinn and other coastal officials also have expressed concerns about possible noise pollution and increased sea traffic as the result of the Wilmington East Area development.

Critics point to a 2016 study by North Carolina State University’s Center for Environmental and Resource Economic Policy (CEnREP). Researchers surveyed people who had recently rented property at North Carolina beaches and 80 percent responded they either would not rent property if turbines were visible or would expect steep price discounts.

“We were somewhat surprised about the strong dislike for viewing turbines from their vacation rental properties, especially given the large majority of respondents said they supported wind energy development,” said CEnREP Director Laura Taylor.

But a January 2022 report by the Southeastern Wind Coalition directly addresses the visual impact of the Wilmington East project and found that the project will not negatively affect the sightlines from Bald Head Island and other coastal communities.

“Upon conducting this analysis, and as clearly illustrated in the images and data that follow, our professional assessment and conclusion is that the wind turbines at the Wilmington East site will be minimally visible from only those locations closest to the project site, and not at all visible
from the vast majority of the proximal towns and beaches. Thus, the overall visual impact of the project from shore will be negligible,” the report’s authors write.

The Southeastern Wind Coalition also developed visualization images that illustrate how the Wilmington East project will appear from nearby beaches.

The BOEM lease for Wilmington East could be awarded as soon as March 2022. That will represent a significant step forward for North Carolina’s offshore wind development—and likely will increase opposition to the project. If anything can be learned from the development that has occurred in New England and the Mid-Atlantic states, it is imperative for the developer to engage early and often with stakeholders, to address concerns prior to completing the COP, and to be open to alternatives.  Further if North Carolina is able to attract a material number of supply chain companies and the coastal communities begin to reap financial benefits for offshore development, this too may increase support for development.  While we don’t have a crystal ball that can predict a final outcome for WEA, what is clear is that after years of being largely dormant, offshore wind is about to take center stage here in North Carolina.