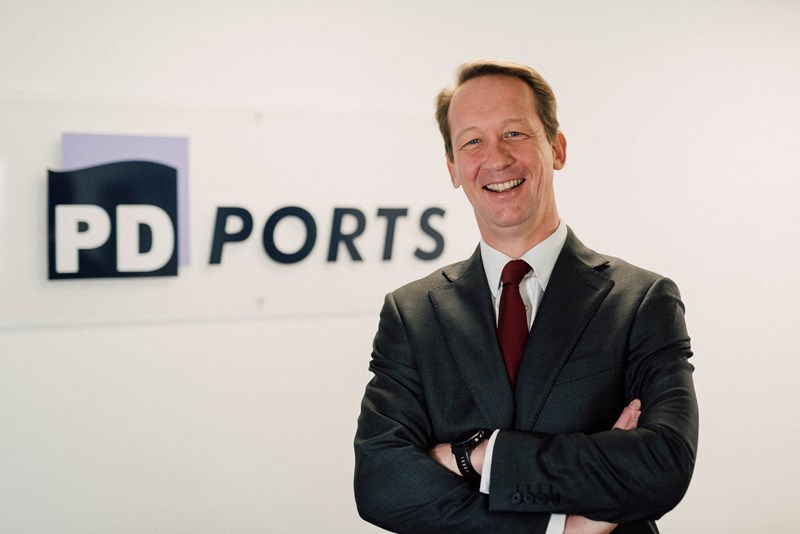 Frans Calje, PD Ports’ CEO, has been awarded an OBE in the Queen’s Birthday Honours List for his services to international trade and the UK economy.

Awarded during the Platinum Jubilee year, Frans receives his commendation after just five years as PD Ports’ CEO – demonstrating the impact his leadership has had on the business as PD Ports continues to act as a driving force in the Tees Valley.

Frans first joined PD Ports in 2008 as Key Projects Director, a role that also saw him act as a member of the senior executive team. Having started his career at the Port of Rotterdam, Frans brought with him a wealth of experience in the maritime sector, particularly in relation to the development of container terminals, and continues to play an integral role in the development and diversification of PD Ports.

Instrumental in the successful transformation of Teesport’s container handling platform, Frans has enjoyed many successes as CEO so far including seeing PD Ports win multiple national awards as the business continues to grow and earn its reputation as one of the most progressive UK port groups.

This personal recognition, he says, has come as somewhat of a surprise. “I couldn’t believe it when I saw the letter arrive,” said Frans. “I honestly thought it must be for someone else!

“It took some time for me to process and whilst I am incredibly surprised, I am also enormously humbled that people think I am making a real difference to the business landscape.

“I am so proud to be an honorary ‘Teessider’, and I truly believe, as we are already starting to see, that this region is capable of amazing things. I have a genuinely fantastic team around me, both at home and at work, and this is as much for them as it is for me.

“The UK ports sector has a critical role to play in international trade and in attracting inward investment to grow a stronger and more sustainable economy whilst supporting efforts to ‘level up’ across the North of England. Here in the Tees Valley we have a number of excellent businesses with highly skilled people. We need to continue building on this good work both regionally and nationally to provide a solid platform for a progressive and bright future.”

“I’ve worked with Frans for a number of years and know him particularly well, both as a colleague and as a friend,” said Jerry.

“He’s an unassuming and moderate man who characteristically ascribes success to the efforts of the team rather than taking any credit himself. However, successful teams need strong leadership and Frans demonstrates leadership in abundance. I am pleased that he has received recognition not only at local level but also on a national stage.

“PD Ports is a pivotal player in the success of the Tees Valley and the very strong pipeline of opportunity that we continue to both develop and support will ensure that this region moves from strength to strength.”

Frans’ recognition comes just six months after fellow PD Ports Director, Russ McCallion received the same accolade in the New Year’s Honours List for his service to both business and the local community within the Tees Valley.