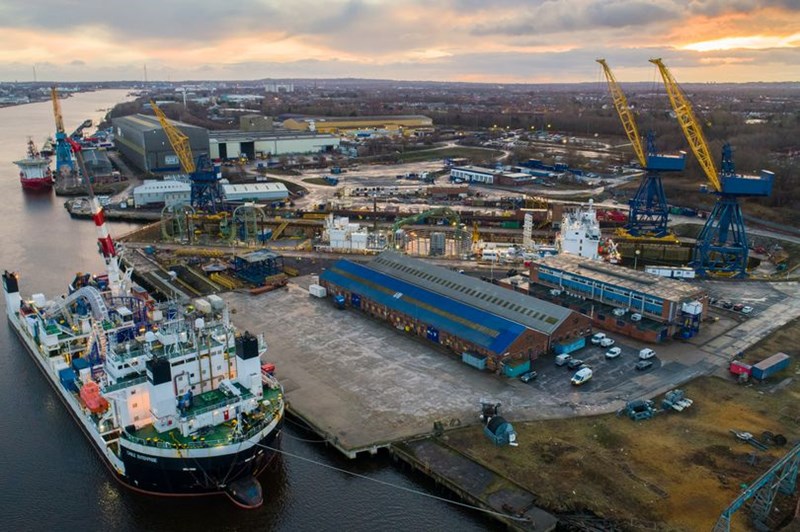 The Hebburn yard is enjoying a buoyant time with four vessels currently on site for a series of works.

North East ship builder A&P Group has reported a buoyant start to the year with its dry dock and quays operating at full capacity.

The company, which also has facilities at Falmouth, in Cornwall, has the largest dry dock on the east coast of England at Hebburn, South Tyneside, which provides ship repair, conversion and fabrication services for the marine and energy sectors.

The new year has started with a raft of vessels from the offshore sector berthing at the Wagonway Road shipyard, where they are currently undergoing extensive programmes of works.

Prysmian Group’s cable laying barge, Ulisse, has arrived at the facility for significant modifications, with works to include the fabrication and installation of a new mezzanine deck, two new thrusters including compartments and lifeboat platforms.

The group’s Cable Enterprise has also returned to the facility, where it alongside A&P Tyne’s West Quay, for minor maintenance before being deployed for cable operations.

Meanwhile, Deepsea Worker is alongside A&P’s Bede Quay following her dry docking. Work on the offshore support vessel will including a full hull paint program, the range and calibration of anchors and cables and the emptying and cleaning of the sewage tank.

Accompanying Ulisse in dock is Prysmian’s newly-acquired shallow water cable installation barge Barbarossa. The Barbarossa will undergo some maintenance and cable lay equipment mobilisation prior to her first project.

Chris Davies business development manager at A&P – Marine, said: “We are delighted to welcome 2022 with a full facility, with a diverse range of vessels benefiting from A&P Tyne’s expertise.

“A&P Tyne’s facility is well placed to support the offshore and dredging markets and careful planning and flexibility enable us to keep with the growing demand from our customers.

“The simultaneous dockings of Ulisse and Barbarossa demonstrates the flexibility of A&P’s facilities, which enables us to deliver multiple programmes of works at any one time.

“The successes of the last few months reflect the hard work and dedication of our team throughout the pandemic and our long-standing relationships with clients and their returning vessels.”

The company said the growth had been driven by a return to military refit programmes carried out at its South West base, which had been absent the previous year.

It also said both its sites are well placed to secure work for the emerging renewable energy as well as the oil and gas and heavy engineering industries.