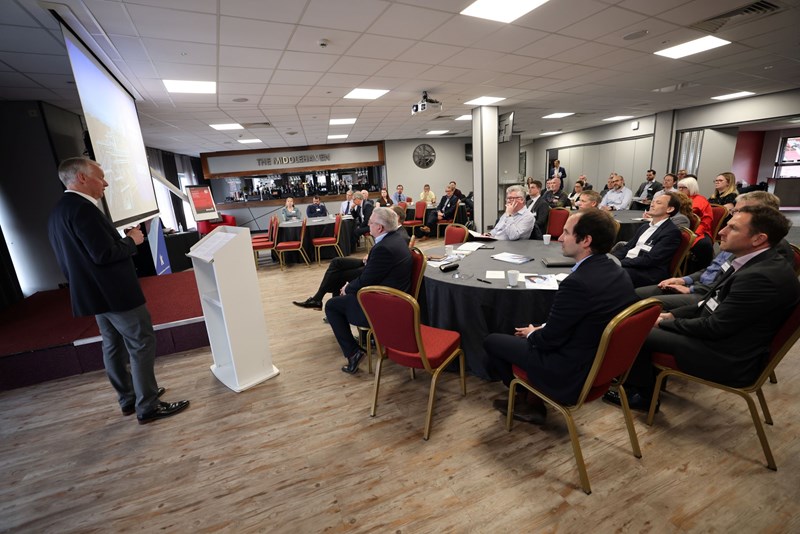 The innovative H2NorthEast project on Teesside was the focus of a stakeholder engagement event hosted by Kellas Midstream on Tuesday 26 April at the Riverside Stadium in Middlesbrough.

H2NorthEast is a ground-breaking strategic initiative to build a 1GW low carbon blue hydrogen production facility based around Kellas Midstream’s CATS (Central Area Transmission System) terminal at Teesside. By 2027, it will deliver 355MW of low carbon hydrogen to local industry, upscaling to 1GW by 2030.

H2NorthEast has already been named as one of the UK’s first carbon capture, usage, and storage (CCUS) developments as part of the East Coast Cluster and is one of several hydrogen projects submitted to the UK Government’s BEIS (Business, Energy & Industrial Strategy) phase 2 Cluster Sequencing Process.

Andy Hessell, Kellas Midstream Managing Director said, “The Humber and Teesside industrial regions represent almost 50% of carbon emissions from all UK industrial clusters. Converting to low carbon hydrogen is the only realistic way to decarbonize those industries, and in doing so help the UK achieve its target of net zero emissions by 2050. We believe that H2NorthEast can play a leading role in delivering low carbon hydrogen to industries on Teesside at a lower cost through synergies with our CATS facility and by using existing distribution and storage infrastructure.”

Tees Valley Mayor Ben Houchen said: “H2NorthEast is a truly forward-thinking initiative that unites the region’s net zero ambitions with infrastructure investment and skills development, helping to further mark us out in the cleaner, safer and healthier industries of the future. The project has the potential to upskill existing jobs and create hundreds of new good-quality, well-paid jobs for people across Teesside, Darlington and Hartlepool, while boosting our local economy by as much as £300m.”

Following the recent announcement of the UK’s Energy Security Strategy, which confirmed a doubling of 2030 targets for hydrogen production to 10GW, H2NorthEast has become even more critical to helping provide secure and cleaner energy for industry and making low carbon hydrogen at scale a reality. H2NorthEast would contribute as much as 10% of the Government’s target hydrogen capacity by 2030.

Andy Hessell continued, “We would like to thank everyone who joined us for the H2NorthEast event. It was great to welcome representatives from so many stakeholder groups, and to see a real appetite to understand the importance of low carbon hydrogen for Teesside.”