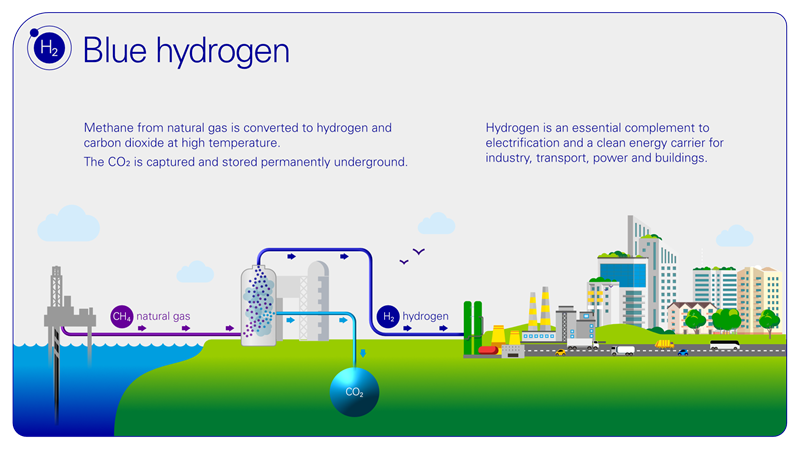 bp, ADNOC (the Abu Dhabi National Oil Company) and renewable energy developer and operator Masdar have signed an agreement to work together to initially develop 2GW of low carbon hydrogen across hubs in the UK and United Arab Emirates (UAE).

Mayor Houchen visited No.10 Downing Street to welcome the deal, in a meeting including industry leaders and Prime Minister Boris Johnson. The deal could lead to the first international investment in the low carbon hydrogen facility in Teesside (H2Teesside), aiming to produce 1GW of blue hydrogen starting in 2027.

“Blue” hydrogen is produced by converting natural gas into hydrogen and carbon dioxide which is then captured and permanently stored. H2Teesside would capture and store up to two million tonnes of CO2 a year through Net Zero Teesside and Northern Endurance Partnership’s carbon capture, utilisation and storage projects in the region, including Teesworks. Access to clean hydrogen – critical for industrial decarbonisation – can reduce emissions, enable new, low carbon products, and unlock future fuels.

The investment is expected to support thousands of jobs and stimulate economic growth. It is also expected to diversify and bolster local supply chains in both the UK and UAE.

Mayor Houchen said: “Low carbon hydrogen is a vital contributor to the UK’s net zero ambitions and, like the Net Zero Teesside project, it’s happening right here, right now. This just cements our region at the forefront of the industry and, just as importantly, will help create even more good-quality, well-paid jobs for people in Teesside, Darlington and Hartlepool.

“Today’s announcement shows global firms are serious about driving these projects of the future forward and are looking to do it on Teesside, undoubtedly attracting more carbon-intensive industries aiming to help meet carbon targets to sites like Teesworks.

“This is just one project that shows how our region, which produces more than 50% of the UK’s hydrogen, is perfectly placed to capitalise on innovation in the sector. We’re also the country’s first Hydrogen Transport Hub, already trialling cleaner vehicles and working with Northern Gas Networks to test hydrogen in domestic gas supplies right now.”

Bernard Looney, bp’s chief executive officer, said: “The UK and UAE governments have bold plans for decarbonization. The UK is our home and we have worked in the UAE for nearly a century. By partnering with the visionary leaders of ADNOC and Masdar, we see massive business opportunity to generate the clean energy the world wants and needs – and at the same time revitalise local economies and create the jobs of the future.”

Prime Minister Boris Johnson said: “This is a fantastic investment in the industries of the future, creating high value jobs across the UK as we build back better and greener. It is clear indication that businesses in the energy sector are taking the transition to cleaner solutions seriously, and a major boost to the UK’s own ambitious net zero goals. Our Global Investment Summit later this year will attract more exciting investment like this to the UK, demonstrating that economic growth, technological advancement and fighting climate change go hand-in-hand.”

H.E. Dr. Sultan Ahmed Al Jaber, Minister of Industry and Advanced Technology, Managing Director and Group CEO, ADNOC and Chairman, Masdar added: “The UK and UAE have enjoyed decades of strong economic ties and the agreements signed today between ADNOC, Masdar and bp will serve to deepen the strategic relationship between our countries. We look forward to building upon this legacy to strengthen both countries’ ambitions to generate economic growth through low-carbon initiatives.”