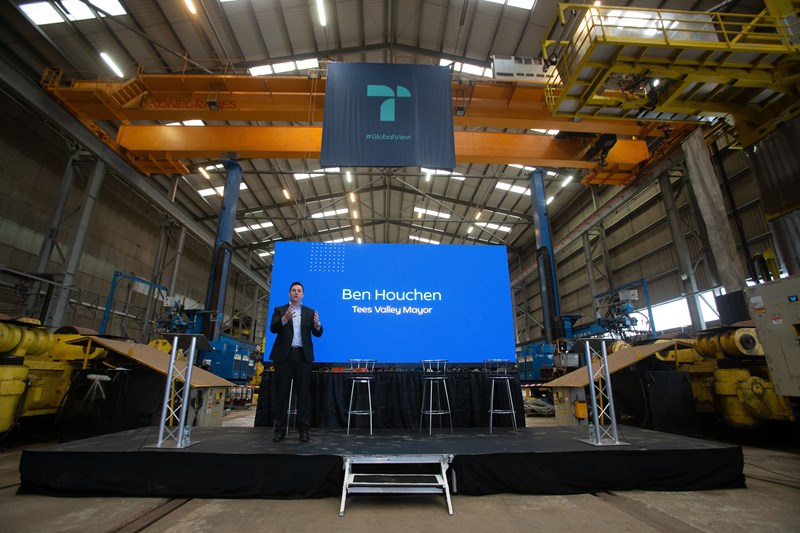 Teesside Freeport – the UK’s first and largest freeport – has today (19 November) begun operations, unleashing its “transformative potential” on the region.

Tees Valley Mayor Ben Houchen officially launched the Teesside Freeport just three weeks ago, and it is now ready to welcome businesses from across the globe as it positions the region as a leader in clean energy, advanced manufacturing and innovation.

Situated at locations right across the Tees Valley, including Teesside Airport and Wilton International and with its heart at Teesworks, the freeport will help businesses benefit from a wide package of tax reliefs, simplified customs procedures, streamlined planning processes to boost redevelopment and government support to promote regeneration and innovation.

The Teesside Freeport will create more than 18,000 new highly skilled jobs and generate billions of pounds for the local economy over five years, with work well under way on the first scheme at Teesworks.

GE Renewable Energy is set to build a new mammoth offshore wind turbine blade manufacturing facility on the site which will supply Dogger Bank, the world’s biggest wind farm. The scheme is expected to deliver up to 750 manufacturing jobs and a further 1,500 in the supply chain.

This facility will sit next to the in-development 1.2km heavy lift South Bank Quay to service the offshore sector, which recently secured £107million from the UK Infrastructure Bank as it made its first investment in the region. It forms part of the wider 4.5msq ft of advanced manufacturing and industrial space set to be built on 450acres of land next to the wharf as the area aims to become UK’s premier offshore wind hub.

Tees Valley Mayor Ben Houchen said: “The day has finally come – after years of campaigning and shouting about the transformative potential of a freeport for Teesside, Darlington and Hartlepool, we’re at last open for business. This has put us well ahead of the game in being able to attract investment and capitalise on everything we have to offer.

“We’re throwing our doors open to the world, showing businesses that we’re a truly outward-looking, international region ready to welcome the cutting-edge sectors of the future. In turn, this will create good-quality, well-paid jobs for local people right across the region, boosting our economy and ultimately putting more money in their pockets.

“We’re already reaping its benefits with investors coming on-site now, with GE Renewable Energy choosing our area because of our freeport status. As we lead the UK in the cleaner, safer and healthier industries and jobs of tomorrow, the sky’s the limit as to what the Teesside Freeport can achieve.”

The Teesworks Freeport will also have access to a share of £200 million of government funding to support the region’s levelling up ambitions and to become the UK’s clean energy powerhouse.

Minister for Levelling Up Neil O’Brien MP said: “I am delighted to see the Teesside Freeport spring into operation today, putting the region at the forefront of UK’s drive to net zero.

“Freeports will help to generate prosperity and spread opportunity by driving trade and innovation and delivering a world class workforce for the future.

“We’re seeing evidence of this in Teesside already with GE Renewable Energy planning to bring their new blade manufacturing plant to the site, which they estimate will create thousands of new jobs.”

Leader of Redcar and Cleveland Borough Council Mary Lanigan said: “It’s great news that the Teesside Freeport has crossed the finish line and will now become a catalyst for world-renowned companies to invest in our region, bringing even more innovation and expertise to the area.

“Vitally, the freeport will also help create the secure and well-paid jobs that people in Redcar & Cleveland, and the wider region, deserve, improving their quality of life and giving a real boost to our communities.”