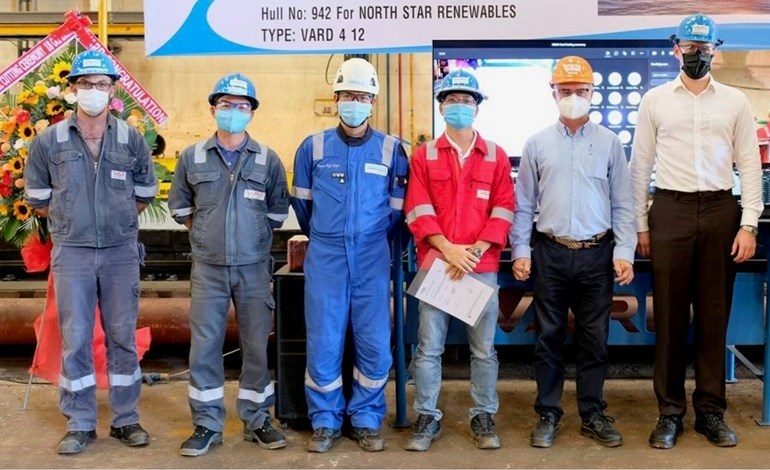 More than 130 new recruits will be taken on locally to support the first ship being delivered from summer 2023.

A traditional moment in the shipbuilding process, the SOV steel cutting ceremony was carried out by North Star’s shipbuilding partner VARD in Vietnam and was also attended by the North Star Build supervision, live streamed to the firm and Dogger Bank VIP representatives.

It is one of two sister 5,000 tonnes vessels being built to accommodate up to 40 technicians working on the wind farm’s offshore wind turbines at its first two phases, Dogger Bank A and Dogger Bank B.

The trio of vessels are chartered for 10-year terms with additional one-year options.

Simultaneously this week, work gets underway on building what will be the world’s first hybrid powered daughter craft for the offshore wind market, as the aluminium-cutting commenced at Alicat’s shipyard in Great Yarmouth, UK.

Designed by Southampton-based naval architects Chartwell Marine in collaboration with North Star, the high-performance craft will be used to safely transfer technicians from the SOVs to work on the wind turbines benefitting from Chartwell’s unique AFS bow fender and other stability technology.

The craft will also be on emergency rescue support standby.

Dogger Bank operations manager Rune Rønvik said: "We are building Dogger Bank with focus on innovation and sustainability, and the vessels supplied by North Star and Alicat are great examples of both.

"First steel cut is a great milestone on the path to have the first SOV delivered at the Port of Tyne in 2023, from where we will run the operations for the world’s biggest offshore wind farm."