A new era in hybrid SOVs and world-leading daughter craft 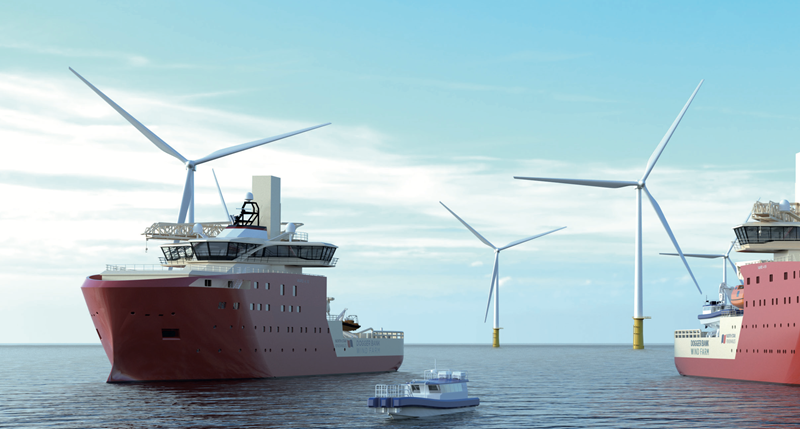 The growing number of windfarms in the UK has ensured that it is truly dominating the global market. There are currently 39 offshore developments in the North Sea, with 2,292 wind turbines1 supplying almost 10 gigawatt of wind power capacity to seven million homes in this country. This is set to quadruple by the end of the decade if the UK Government’s promise to power every home with offshore wind energy is kept2.

To support this increase in wind turbine numbers, more service operations vessels (SOVs) will be required. These specialist high specification assets are built to accommodate the army of technicians working on wind turbines and substations, which are often located in remote and tricky to reach offshore arrays. SOVs provide stability in-field to support the safe transfer of personnel and equipment for daily operations, either by a motion compensated walk-to-work gangway or daughter craft vessel. These ships also provide comfortable living space for employees working away from home for weeks at a time.

North Star of the North Sea

North Star has the largest UK-wholly owned marine fleet and was established 135 years ago to support the UK fisheries industry. Since the 1970s, it has been synonymous with the North Sea oil and gas industry. The firm currently supports around 60 offshore oil and gas installations, in what is one of the world’s most demanding and regulated industries and has invested £350million in the last 18 years to build a modern, class-leading vessel fleet.

The business employs around 1,400 crew and onshore staff in the UK and is the market leader in emergency response and rescue vessel services in the North Sea. Its crews have never left a location unsupported, providing around-the-clock assistance as required. The firm operates the largest fleet of Offshore Support Vessels in the UK Continental Shelf, with 42 Emergency Response and Rescue Vessels, including 15 Multi-Role Vessels, 2 Platform Supply Vessels and the world’s largest daughter craft fleet. The business operates in compliance with, ISO 14001, ISO 9001, and ISM.

All of this experience and qualification has played an essential role in the company’s ability to make a big splash on entering the offshore wind vessel market, with its first contract award secured to support the first two phases of the Dogger Bank Wind Farm, a joint venture partnership between Equinor, SSE Renewables and Eni. As a result, its North Star Renewables arm is now the UK’s largest SOV provider and is leading the pack as it also becomes the first to bring hybrid-powered daughter craft to the global renewables market.

With three strategically placed bases along the length of the UK’s north-east coastline in Aberdeen, Port of Tyne and Lowestoft, the firm will deliver its first renewables fleet order from Summer 2023. It consists of three SOVs and three associated daughter craft vessels, creating 130 local jobs at the same time.

This first fleet marks the start of North Star’s renewables journey. The firm has the capabilities, means and ambition to secure at least 15 fleet build contracts in the next five years.

In the past, seafarers were faced with the more basic living conditions vessels back then offered, with limited space to relax in or facilities to help unwind. It is the company’s mission to ensure its vessels have superior hotel standards with stylish and spacious accommodation, gyms and healthy menus. Pivotal to comfort, is its technology that counters the ship’s undulating rolling motions so North Star has placed vessel stability as the paramount consideration in its SOV designs.

With this at the forefront of the SOV design’s objectives, it has been developed to both meet their client’s requirements, and give North Star’s fleet the edge on safety, comfort, workability, reliability
and sustainability.

The company has significant shipbuilding and project management experience to draw on, having received delivery of 17 new ships in the last decade on schedule and within budget. This includes diesel-electric and dynamic positioning (DP) experience, building ships in sequence, and creating efficiencies through sister ship build strategies.

This first fleet of SOVs are being built by global designer and specialised vessels shipbuilder VARD, in Vietnam. Developed in partnership with North Star, they have been tailored for this first contract with Dogger Bank where its wind turbines are more than 130 kilometres off the north-east coast. First-steel was cut in October signalling the SOV construction process is underway on the first newbuild.

The pair of VARD 4 12 SOVs being delivered will be 78 metres in length with a beam of 19 metres and accommodation for 60 persons in single cabins, each weighing 5,000 tonnes.

The VARD 4 19, 85-metre vessel has a 19 metres beam and will be able to accommodate 78 persons in single cabins. It weighs 6,000 tonnes and also has a heliport.

For optimal efficiency, the power package within the vessels is hybrid. With enough battery capacity onboard currently to allow for spinning reserve and peak shaving, they will run with less redundancy in operation. This means instead of two engines deployed on DP, just one will run, resulting in significant saving-to-fuel-burn.

The vessels have been constructed with the capability to upgrade the battery size once the challenge of in-field charging is resolved. This provides the SOV with a very predictable operational profile. The vessel will go from port-to-windfarm, windfarm-to-port, which means the vessels will be plugged into shoreside power in port. The entire hotel load in port will be serviced by a shoreside power source also charging the batteries, allowing for a short period of operation without using diesel gensets.

Over time, North Star is working with another technology partner to increase the battery capacity from just under 1 MWh to potentially up to 18-25 MWhs, allowing for longer operation periods of time in-field using just the batteries.

North Star is also working closely to monitor other zero emission fuel sources, including hydrogen (LOHC) and methanol. The future technology spaces on its vessels ensure that they are future proofed to allow for retrofit to utilise these fuels in the event that sufficient fuelling infrastructure is put in place to enable that transition.

The workability of the SOV has also been scrutinized to validate the key elements the fleet has to offer. North Star has collaborated with a technology company to assess personnel transfer, helicopter landing and take-off, sea sickness and comfort.

The vessels have height-adjustable, motion-compensated gangways from UPTIME International AS each consisting of a 30m autonomous gangway with artificial intelligence, mounted on elevator towers to ensure highest possible logistics capability between vessel and turbines. One of the gangways will also have a motion compensated 3D crane function included in the delivery.

The SOVs will also feature 3D Motion Compensation technology from Red Rock, which ensures safe and efficient load transfers from the SOV’s to the monopile transitions pieces.

North Star also took the opportunity to improve the logistical lifecycle efficiency on board the vessel by adopting a side-loading concept similar to aeroplane designs. This also offers a reduced safety incident risk. The main deck layout has been designed in conjunction with experienced offshore wind operators and turbine manufacturers to maximise available space. They have also adopted new scanning and tracking technology to provide accurate reporting throughout the loading and offloading process to improve traceability.

Decision support software technology will also be used to improve decision making by its client and crew on board the vessels. The MO4 technology provides motion forecasting information based on the vessel’s performance, weather and metocean conditions in order to provide planning information which informs the client and crew as to the safest, fastest and most sustainable means of providing access to the wind turbine generators which require intervention.

The modern and high-end living space on board the vessel offers V1 C1 class accommodation for client personnel. With light, open spaces throughout and exterior facing technician cabins, there are also multi-functional common areas, modern gym facilities and a catering partner renowned for producing high quality, nutritious food. For anyone that’s worked offshore will tell you, a well-rested, healthy, and well-fed workforce makes all the difference.

Collaboration is forever woven throughout North Star’s business model. The company champions new and established companies alike. Working closely with Southampton-based Chartwell Marine, a specialist consultancy which supports boat builders and vessel operators worldwide, the team has developed a pioneering design to bring the next generation of daughter craft to reality.

The team’s design introduces hybrid propulsion into the daughter craft market for the first time, whilst setting a new standard for safe operations with an increased sea state operability at wave heights of up to 1.7m Hs. The vessel also carries green technologies to reduce carbon emissions, configured for further improvements as the sector evolves.

Each one can support up to 12 personnel and two crew on board and has an aluminium hull which is easier to repair and more sustainable.

The first two daughter crafts are currently being built in Great Yarmouth by Alicat and will also utilise a well-established, safe LARS methodology.

With over 24 years’ experience in the maritime industry, Michael has been working at North Star since 2014, starting as a vessel superintendent.

He is also a volunteer appointed member of the Fraserburgh Harbour Board.

RICS WBEF / HKA Webinar | How can the construction industry adapt to a ‘new normal’?

Operating in uncertain times: how can the construction industry adapt to a ‘new normal’? DATE &...