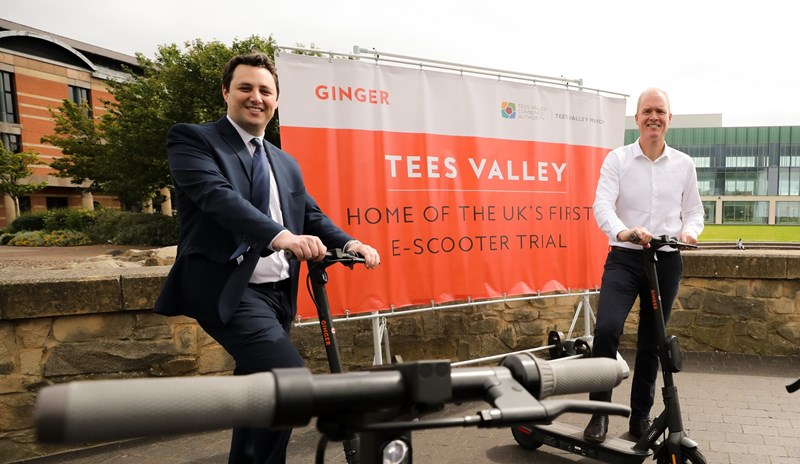 Tees Valley Mayor Ben Houchen has today (20 May) hailed the success of the region’s E-scooter pilots as the Government announced that they are being extended.

In July 2020, Middlesbrough became the first place in the UK to launch a trial of e-scooters, following a successful campaign to secure the pilot by Mayor Houchen which saw a further rollout to Hartlepool before launching in another 30 towns and cities across the country.

E-Scooters, which are GPS tracked, have now been taken on 23,600 journeys and travelled more than 81,600 miles between them which is equivalent to a third of the distance to the moon or 3.5 times around the world.

Ginger, the UK-based e-scooter company working in partnership with the Tees Valley Mayor and Combined Authority, to provide a simple, cost-effective and reliable service to help its 14,000 users travel around the region easier.

As more people return to work following the easing of Covid restrictions, the government has announced that local authorities can extend the e-scooter trials until March 2022 so users can continue to take advantage of the convenient, socially distanced and environmentally friendly vehicles. 57% of riders are either in full or part time employment with an additional 24% being students.

Mayor Houchen said: “As you can see from the numbers this pilot has been popular with more than 14,000 people regularly taking advantage of the scooters, proving they are real, affordable green transport alternative for students and workers.

“Of course, when we launched them, we knew that there would be a few idiots who would try and misuse it but, as we’ve seen elsewhere in the country, this has been limited to a few isolated incidents. Part of the point of a pilot is to test a product for teething issues but these have been few and far between.

“E-scooters are another example of how we’re doing things differently and developing the technologies of the future, which is crucial for my plan for good-quality, well-paid local jobs for local workers.”

Ginger is currently offering a programme of free rides to all NHS, Armed Forces and emergency service personnel. Please visit https://www.ginger.town/free-rides-for-heroes to find out more.

E-Scooters are currently in operation throughout Hartlepool and Middlesbrough and can be ridden by anyone over the age of 18 with a provisional driving or moped licence. The e-scooters are limited to a top speed of 11.5mph and are barred from entry to high-risk and pedestrian areas. The wearing of helmets is also recommended.