Osprey – Moving one of the UK’s Heaviest Bridge

Osprey moved the UK’s heaviest single-span bridge recently, at Gipsy Patch Lane, on the outskirts of Bristol. This team effort will deliver immense benefit to Bristol businesses, and to the local community.

On behalf of South Gloucestershire Council, Network Rail has been putting in a new railway bridge at Gipsy Patch Lane. The work forms part of the Cribbs Patchway MetroBus Extension scheme, a £57m investment that should reduce congestion in the area and improve journey times for all road users with a new public transport system and an alternative to travelling by car.

Supporting Alun Griffiths (Contractors) Ltd, Osprey was asked to deliver a full suite of specialist logistics that could move the UK’s heaviest, single-span, reinforced concrete ‘portal’ structure. The approach was challenging – completing the transport and installation in one piece by using a 144-axle self-propelled modular transport (SPMT) unit with 576 individual wheels, heavy-lift cranes, and an innovative arrangement of hydraulic jacks and longitudinal beams. In all, the portal structure and the installation equipment weighed 5200 tonnes – over half the weight of the Eiffel Tower.

With a span of almost 25m, the new bridge at Gipsy Patch Lane replaces an existing single-arch brick structure. The installation needed a closure of the railway.

Using our in-house experience of transporting and installing other giant assets – everything from the same kind of railway engines that will use the Bristol line, to renewable wind farm turbines or nuclear power plant components – Osprey used a wide range of equipment to complete the move. The project experienced challenges but the SPMTs manoeuvred the entire portal into position, while the bracing effectively ‘held the walls apart’ to maintain its structural integrity during the move. Assets of this immense strength have flexibility built into them, which is a challenge that needs to be overcome during installation.

This way of working significantly reduced the amount of time our team needed to be on site – which is of instant benefit to project planning. However, it is also a benefit to the local community – it means their lives are disrupted far less.

Osprey’s project manager, Mitchell Smith: “The Gipsy Patch Lane bridge is one of several in this programme of work for Network Rail, but it’s the largest and the heaviest. The project faced challenges and we found ways to adapt and, in fact, improve our health and safety approaches – making it possible to work very collaboratively with our suppliers, and move the bridge into place in the shortest amount of time possible.”

The new bridge will bring communities together, reduce commuter times, and provide a boost to the business environment that helps the local economy. Mitchell continues: “The Gipsy Patch Lane bridge will reduce commuter times for several major employers. We’re proud to play our part in preparing for the future, helping our local Bristol community to re-establish even better connections with an improved transport network. What’s more, many of our team live in the local area, so it’s been very rewarding to be working on something that will have such a long-term impact – this new bridge should be here for at least the next 125 years.”

The importance of upgrading infrastructure

Efficient road and rail networks are crucial for the economy and renewed investment in transport and communication links is essential. Traditionally, a project like this might involve many months of disruption. In all, Gipsy Patch Lane itself has to be closed for around eight months, but we’re delighted to say the overall disruption is being reduced by the work we’ve been doing – working closely with our client, Alun Griffiths, to remove Network Rail’s older and narrower bridge and replace it with an impressive piece of smart, modern engineering. 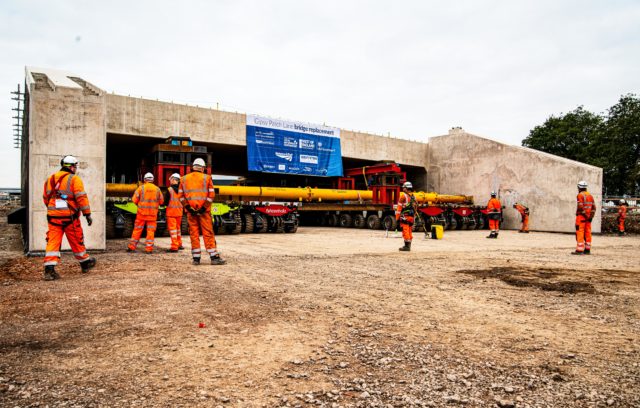