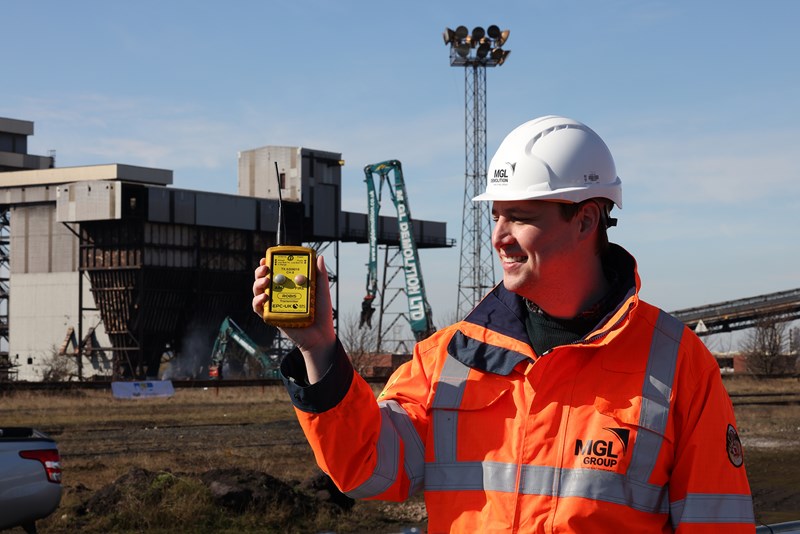 The Mayor pushed the button on the controlled explosion to level the old coal handling facility and usher in the next phase of redevelopment for the site.

The facility, built in the 1970s, was used to help blend the coal that came in via ship and transform it into different grades. Some of this was then sent on to ovens to turn it into coke, which was used to power the blast furnace.

The 15-week project, creating 20 jobs, is being led by Hall Construction with specialist contractors from MGL Demolition. The blast saw 2kg of explosives used on each of the structure’s ten pillars to bring the facility down safely, ahead of the recovery of its 3,000 tonnes of scrap.

It is the first project in the Advanced Demolition Programme, which is running weeks ahead of schedule and which will soon include works at the RDL Heavy Stores facility and Tube City building.

Following the Chancellor’s announcement on the 3 March Spring Budget that the Tees Valley has been successful in becoming the UK’s largest freeport, Teesworks secured an investment by GE Renewable Energy on the Freeport Zone on the west of the site. This work taking place will clear the equivalent zone on the east of the site and unlock it for further investment.

Mayor Houchen said: “In the past couple of weeks, we’ve seen lots of good news that represent massive opportunities and mark real change at Teesworks. From successfully securing the UK’s largest Freeport in our area and, thanks to that, welcoming GE Renewable Energy onto site to the unveiling of the new Teesworks gatehouse and entrance, things are really ramping up.

“Work has also been speeding along on other demolition and remediation projects, such as the tearing down of the torpedo ladle sheds to completely clear the 143-acre Dorman Long site paving the way for a new commercial zone.

“But now the time is right to accelerate work on some of the harder and more complex sites that contain large structures, like the coal handling facility. This is strategically important to the future of Teesworks, sitting as it does just a couple of hundred metres from the deepest port on the east coast, a great asset.

“We’ve already created more than 500 jobs on site through demolition and preparation works alone, with more to come as we focus on the east of the site. Only by going further faster can we make sure we’re ready to grab all of the opportunities, investment and good-quality, well-paid jobs our Freeport will bring.”

Cllr Mary Lanigan, leader of Redcar and Cleveland Borough Council, said: “The demolition of the coal handling facility will help unlock the site for further investment and help accelerate the next phase of redevelopment on site.

“The huge economic potential of the Teesworks site is really starting to become clear and the recent news about the Freeport, GE Renewables investment and job creation and planning approval for the South Bank Quay are really welcome especially as they will bring investment and good quality jobs for local people.”

Newcastle-based Napper Architects has transferred its ownership to the people who helped build the b...