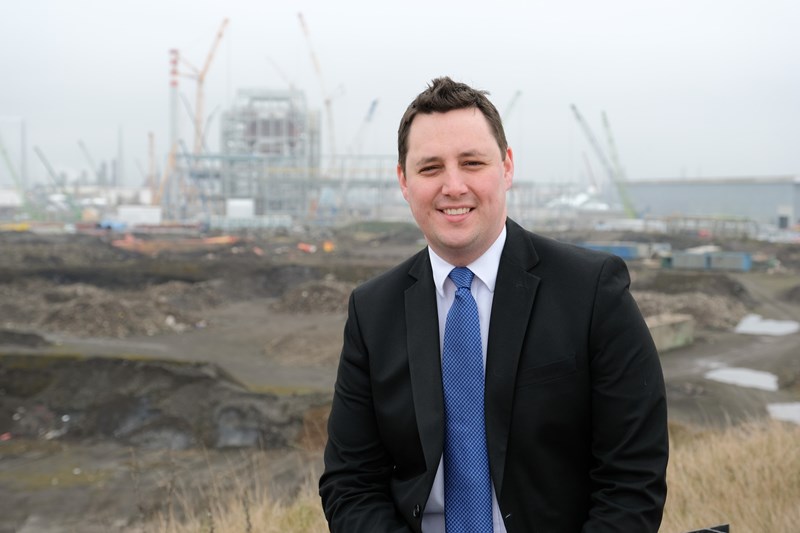 The proposed development, named H2 Teesside, would begin production in 2027, is targeting 1GW of hydrogen production by 2030.  A feasibility study is currently taking place into the project, which would further boost the region’s ambitions to become a clean energy powerhouse for the UK and support other nearby industries in converting to use hydrogen over natural gas and other energy sources.

Blue hydrogen is produced by converting natural gas into hydrogen and carbon dioxide which is then captured and permanently stored. The H2Teesside project would be integrated with the already-planned Net Zero Teesside and Northern Endurance Partnership carbon capture, utilisation and storage projects in the region.

With 1GW hydrogen production, H2Teesside would generate and send for storage up to two million tonnes of CO2 per year, equivalent to capturing the emissions from the [gas] heating of one million UK households. The captured CO2 would flow through Net Zero Teesside’s facilities and be taken for subsea storage via NEP’s offshore infrastructure.

The announcement came the day after it was revealed the Net Zero Teesside and Northern Endurance Partnership project had secured an extra £52million in private and public funding for the scheme. BP has also already signed a Memorandum of Understanding with the Tees Valley Mayor and Combined Authority to explore the potential for green hydrogen, with the creation of the UK’s first hydrogen transport hub.

Mayor Houchen said: “This great news is just the icing on the cake of the past couple of weeks, when we’ve seen announcement after announcement on how Teesside, Darlington and Hartlepool is set to play its part in the clean energy revolution and the innovative sectors of the future in the way to Net Zero.

“We have been working alongside BP for years on our Net Zero Teesside and hydrogen transport projects, with the former getting a huge funding boost just yesterday. This announcement is yet another vote of confidence in our region from BP as it’s becoming increasingly clear there’s no better place to do business in the sector than right here.

“The clean energy sector is central to my plan for jobs, creating thousands of good-quality, well-paid jobs in these industries for generations to come. In securing our Freeport, the news of GE Renewable Energy creating its offshore wind turbine blade facility in the area, and now BP announcing its intention to strengthen ties, it won’t be long before other global businesses are attracted to invest here.”

Dev Sanyal, BP’s executive vice president of gas and low carbon energy, said: “Clean hydrogen is an essential complement to electrification on the path to net zero. Blue hydrogen, integrated with carbon capture and storage, can provide the scale and reliability needed by industrial processes. It can also play an essential role in decarbonising hard-to-electrify industries and driving down the cost of the energy transition.

“H2Teesside, together with NZT and NEP, has the potential to transform the area into one of the first carbon neutral clusters in the UK, supporting thousands of jobs and enabling the UK’s Ten Point Plan.”

UK Energy Minister Anne-Marie Trevelyan said: “Driving the growth of low carbon hydrogen is a key part of the Prime Minister’s Ten Point Plan and our Energy White Paper and can play an important part in helping us end our contribution to climate change by 2050.

“Clean hydrogen has huge potential to help us fully decarbonise across the UK and it is great to see bp exploring its full potential on Teesside.”

The H2 project would be developed in stages, with an initial 500MW of blue hydrogen capacity in production by 2027 or earlier and additional capacity to be deployed by 2030 as decarbonisation of the industrial cluster gathers pace. bp sees potential for further hydrogen demand in Teesside beyond 2030

The feasibility study, which is expected to be completed this year, is exploring technologies that could capture 98% of carbon emissions from the hydrogen production process. A final investment decision for the project is expected to come in early 2024.