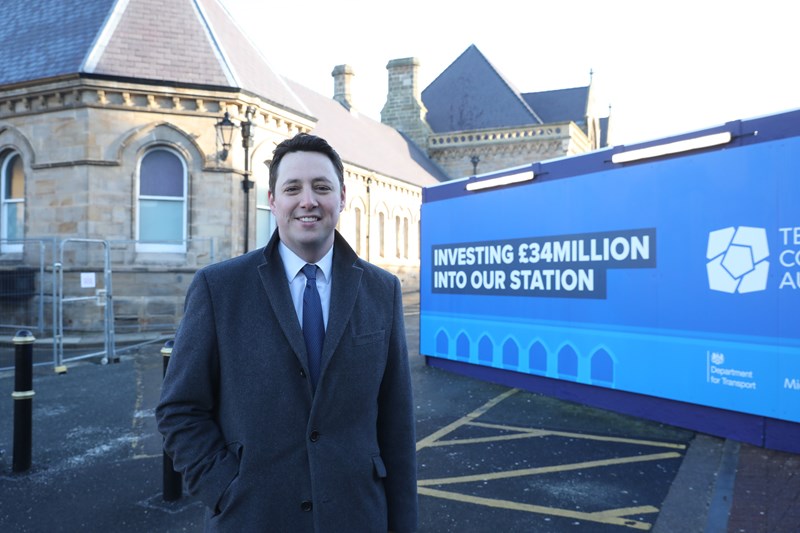 Tees Valley Mayor Ben Houchen today (25 January) revealed that direct trains between Middlesbrough and London will return by the end of this year, as work gets under way on the station’s £34million upgrade.

In order to allow for more services and the longer LNER Azuma trains that run on the East Coast Main Line to the capital, platform 2 is being extended with construction work set to be complete by May, ahead of the restoration of the direct London service in December.

The Mayor visited the station to see first-hand how the scheme was progressing which, just a year ago, was still a design on a page. Since then, the Mayor and Combined Authority have been working with Network Rail to significantly speed up the delivery of the improvements.

Further phases of the scheme will see major customer service improvements at the station including opening up the redundant, derelict and dilapidated station undercroft to provide a new entrance into the station subway and newly refurbished workspaces. There will also be upgrades to the road to the front of the station, improving access between the station and the town centre. A further phase will see a new platform 3 built to the north of platform 2 to further increase train capacity within the station.

This is the first significant public investment in a Tees Valley rail station since the opening of James Cook University Hospital Station in 2014 and is the first part of the Mayor’s ambitious plans to transform the rail network across the region in order to improve rail travel for local people.

Mayor Houchen said: “For years people have been promising to improve Middlesbrough station and produced nothing more than shiny pictures. When I became mayor, I promised to deliver the investment Middlesbrough Station desperately needed and to secure the return of direct trains to London.

“I’ve provided £22.5million and secured the rest from government to make the redevelopment a reality and we are now getting on with the jobs. Work on platform 2 will be completed in just a matter of months and LNER Azuma trains will be rolling into the station from London in December.

“The work at Middlesbrough station isn’t just important for restarting a direct train service from the town to the capital, it is also critical for improving local train services so that thousands of passengers in Teesside, Darlington and Hartlepool can get the fast, frequent and better quality train service that they deserve.

Transport Secretary and Minister for the Northern Powerhouse Grant Shapps said: “The massive improvements being made to Middlesbrough Station underline our commitment to levelling up the North East, investing in the connections which deliver better journeys and kickstart economic growth.

“The long-awaited return of services to London is just one part of the massive investment being put into transport across the region, from work to restore the Ashington-Blyth line and millions to upgrade the TransPennine route.”

Matt Rice, Network Rail’s Route Director in the North and East, said: “We’re delighted to be able to continuing playing our part in delivering the long-held aspiration to secure a direct-to-London train service without unduly impacting the services that already serve the town.”

Graham Meiklejohn, Regional Development Manager for TransPennine Express, said: “Today marks the start of a phased delivery of range of significant improvements at Middlesbrough railway station, both on the tracks and within the historic building.  We are pleased to be working in collaboration with the Mayor and the Tees Valley Combined Authority to enhance the station, its access to the town and the facilities provided to customers.”