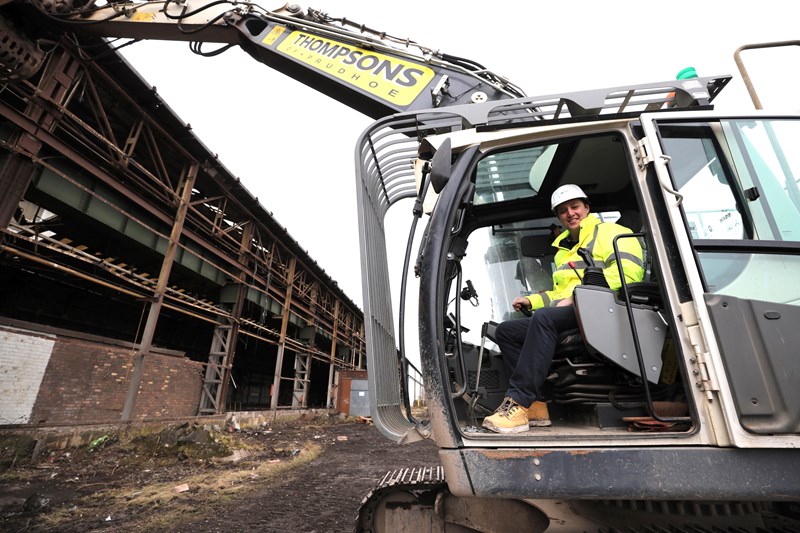 Built in the 1920s, the 250,000sq ft shed was used to house specially designed rail ladles, called torpedoes, which were hauled by purpose-built 70-tonne locos over a four-mile rail system to move molten iron from the Redcar Blast Furnace and into the BOS plant for processing.

Each torpedo weighed 350 tonnes empty and 700 tonnes when filled with molten iron. The ladle shed has laid unused since 2015 when the blast furnace closed, with the ladles removed during the closure.

The torpedo shed is the last building left standing on the 143-acre Dorman Long area and clearing the sheds will unlock the final 30 acres of land on the site, paving the way to create a new commercial zone. The Dorman Long zone is already earmarked to house a £300million Energy from Waste plant.

The project is being carried out by North-East demolition specialist Thompsons in partnership with longstanding Darlington-based Teesworks contractor Hall Construction. Up to 35 jobs will be created from the 18-week project.

It comes just days after new images were released that detail the transformation of Steel House, the former British Steel Corporation’s Teesside headquarters, and the new, modern look that will be in place when it becomes the base for the development of the entire Teesworks site

Tees Valley Mayor Ben Houchen said “The redevelopment of the Teesworks site is a key part of my plan for jobs, a plan that is creating good-quality jobs for local workers and putting more money in their pockets for them and their families.

“We are breathing new life into our former steelworks site and with this comes jobs. In the last seven months the Teesworks site has gone from a site with little going on other than essential maintenance and safety work to a hive of activity through our ongoing demolition and remediation programme, which has created 557 jobs for people from across Teesside, Darlington and Hartlepool.

“As well as being the latest in a long line of projects taking place across Teesworks to get the site investor-ready, this is the biggest and most specialist demolition we’ve undertaken so far.

“This is the final step in getting another area of Teesworks entirely cleared, primed and ready for new investment, creating up to 35 much-needed construction jobs in the process and many more once developed out.

“But we’re not just knocking things down – where practical and possible we are regenerating assets as we are doing with Steel House, which will sit alongside our newly built, state-of-the-art gatehouse to wow investors and attract them to the site.”

Leader of Redcar & Cleveland Borough Council, Councillor Mary Lanigan, said: “This will create good, high quality jobs right here and right now – but it is also part of making sure we remain on target to realise the global potential of this industrial site which is a huge economic asset for us in Redcar and Cleveland and the entire region.”