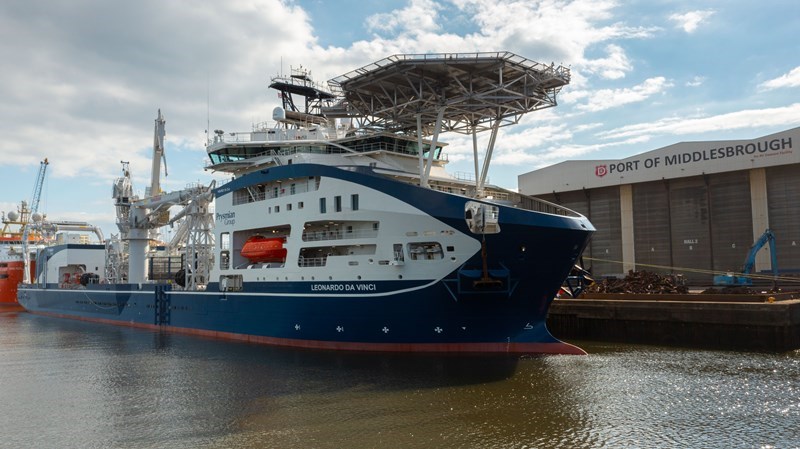 The 171-metre ship, named ‘Leonardo da Vinci’, set a new record as the largest offshore wind vessel ever to pass under Middlesbrough’s famous Transporter Bridge when it completed its recent voyage to AV Dawson’s Port of Middlesbrough.

Built this year, by Prysmian Group, world leaders in the manufacturer and installation of subsea cable, the Leonardo da Vinci is actually a record breaker herself. The ship is the most advanced cable-laying vessel in the world. It has the highest cable carrying capacity in the market and a very large bollard pull to allow for ploughing in very challenging seabed conditions. It can also operate for extended periods in challenging weather and work to the deepest depths.

Peter Watson, Prysmian’s installation manager said: “The vessel allows us to offer an ever wider and more versatile range of installation services and strengthen our leadership position in this highly competitive sector.”

Mr Watson said: “The Leonardo da Vinci will be a key enabler of a carbon-neutral world by 2050. We are delivering most of the biggest projects in the world and the Leonardo da Vinci has a critical role to play in ensuring that our market share grows in the future.”

Gary Dawson, AV Dawson’s managing director said: “It was an amazing sight to watch the Leonardo da Vinci coming into berth at Port of Middlesbrough. It’s all been very top secret so we’ve not been allowed to talk about it until today, but now we really do want to tell the world as it just illustrates how Teesside and the River Tees is evolving to embrace and lead the way in exciting new industries such as offshore wind.”

“Our relationship with Prysmian began with them having just a container of equipment on our site. In the last ten years their Teesside based operation has grown at an incredible rate and they now rent a number of large warehouses on site and use our port to manage all their Northern European marine operations.

“It’s very much a partnership and we’ve made significant investment to support Prysmian’s expansion, from building bespoke warehouses with roof access for cable spooling operations to investing in the quayside. We’ve been planning for the Leonardo da Vinci’s arrival for the last two years. This has involved investing millions in dredging a deeper berth and dredging the channel to enable the Leonardo da Vinci to reach the berth. This investment gives us deep-water berths with a depth of up to 9.5 metres plus the tides, which enables us to not only support Prysmian with their largest vessels but also to support other new customers too, in offshore wind and other sectors.”