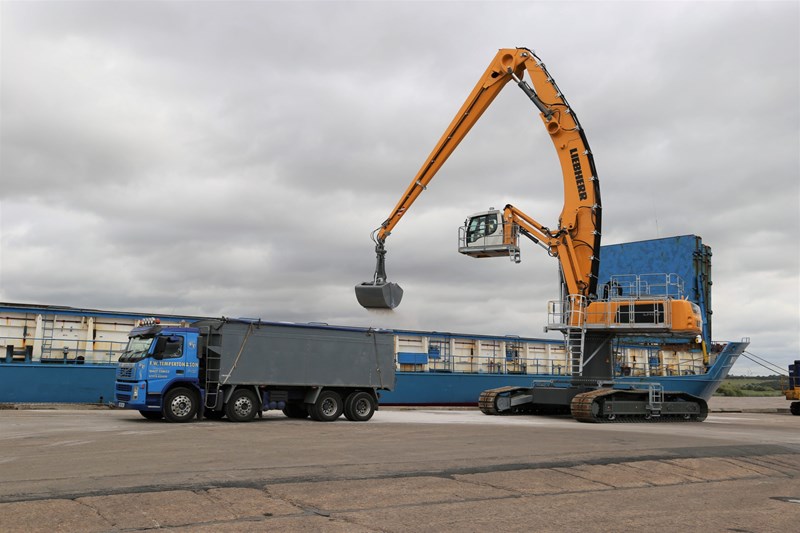 PD Ports has taken delivery of a brand new, state-of-the-art, £0.9 million materials handling crane that will boost productivity and efficiencies for customers at its Groveport site.

The new equipment, manufactured and built by Liebherr, one of the world’s largest construction machine manufacturers, forms part of a long-term strategic plan for the port operator to support strategic business growth across its Humber-based operations.

The crane, which was built to a bespoke specification for PD Ports, will optimise the discharge time of vessels, reducing turnaround times by up to three times for certain cargoes, ensuring the port maintains its highest operating standards whilst continuing to provide customers with a high-quality and reliable service. The equipment is also the latest in a number of infrastructure investments made by PD Ports and delivered by Liebherr across the port operator’s nationwide locations.

A number of staff at Groveport, the largest site in PD Ports’ Humber cluster which also includes Immingham, Keadby and Hull, will now receive specialised training on the equipment in order to ensure it is utilised as safely and effectively as possible.

Geoff Lippitt, Chief Commercial Officer at PD Ports, explained how this latest infrastructure investment marks a significant milestone for Groveport as it continues to position itself as a market leader in bulk cargo handling.

“We’re delighted to have such an impressive and world-leading piece of equipment on site at Groveport,” said Geoff. “The new crane will deliver significant benefits to our customers, drastically reducing the discharge times for vessels resulting in huge cost savings as customers can turn their vessels around much faster.

“Our reputation and exceptional customer service sets us apart from our competition, but by continuing to also invest heavily in infrastructure and resources at Groveport we believe we can further strengthen our position as not only the UK’s premier hub for steel handling, but a market leader in handling a wide spectrum of bulk cargoes.”

The delivery of the crane builds on a long-standing partnership between PD Ports and Liebherr, who have also provided equipment, including electric powered RTG cranes, for PD Ports at Teesport, the port operator’s largest operation and the fifth largest port in the UK.

Mike Hanlon, Ports and Material Handler Product Specialist at Liebherr, said that the machine manufacturer was delighted to deliver the equipment and play its part in the continued growth of PD Ports’ operations at Groveport.

The Port of Blyth has officially launched a £1m Wind Turbine Training facility complete with a full...