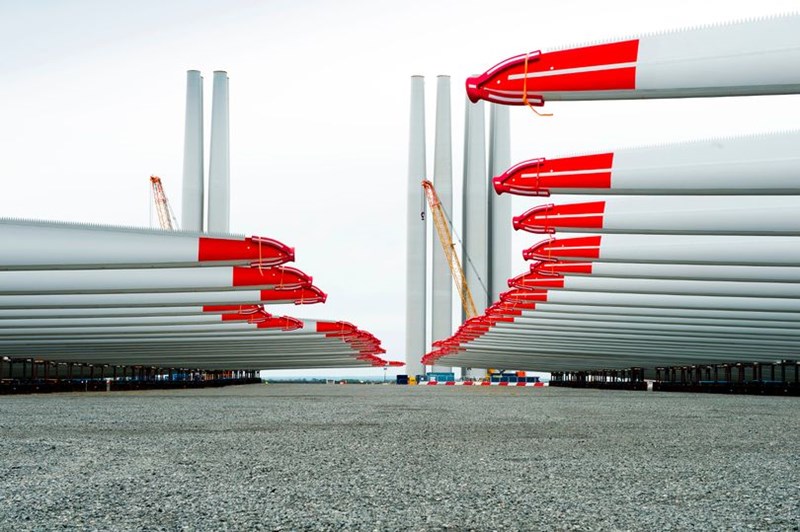 Towers and blades lined up on the quayside at Hull. Both will now be manufactured on the Humber. (Image: Hull News & Pictures Ltd)

GRI Renewables is to create more than 300 jobs as part of a £78 million investment at the South Bank site, building the huge tower sections for the massive turbines.

Both projects have also been backed by the Government’s £160 million Offshore Wind Manufacturing Investment Support scheme.

“With less than a hundred days to go until the climate summit COP26, we need to see more countries embracing new technologies, building green industries and phasing out coal power for a sustainable future.”

Both sites will not only provide essential components to offshore wind farms being developed to serve the UK, but be geared up to export around the world.

Business and Energy Secretary Kwasi Kwarteng said: “With its close proximity to some of the world’s largest offshore wind farms and strong skills base, the Humber region is vitally important for the growth of the British offshore wind industry and is at the heart of our green recovery.

“Our announcement backed by private investment will give a boost to this important industrial heartland, creating and supporting thousands of good quality jobs across the region while ensuring it is on the frontline of developing the next generation of offshore wind turbines.”

GRI will join SeAH, the monopile manufacturer, at Able Marine Energy Park, with the South Korean firm having committed to the North Killingholme development earlier this summer.

It builds 2,000 towers a year for onshore and offshore deployment with plants in Spain, Brazil, US, Turkey, India, South Africa and Argentina. It has supplied to continental North Sea sites in Germany and Holland.

Chairman and chief executive of GRI, Jon Riberas, said: “We are proud to participate in this major project to power British homes and communities with wind energy towards sustainability and carbon neutrality. This project will create a worldwide leader in the offshore sector in a market that is increasingly demanding and constantly evolving.”

Siemens Gamesa will add a further 41,600 sq m to the five year old facility to meet the next generation scale - with blades topping 100m in length. It will double the size of the plant, with construction due to begin within weeks, safeguarding more than 800 existing roles.

Chief executive of Siemens Gamesa’s offshore business unit, Marc Becker, said: “Since our offshore blade factory opened in Hull in 2016, Siemens Gamesa has proudly served as the catalyst for the powerful growth the area has seen. The rapid development of the offshore wind industry – and continued, strong, long-term support provided by the UK government for offshore wind – has enabled us to power ahead with confidence when making these plans. “We’re committed to unlocking the potential of wind energy around the globe, with solutions from Hull playing a vital role.

“Siemens Gamesa continues to be the leading supplier of offshore wind turbine technology in the world’s leading offshore wind market, the UK. Through safe, efficient, and reliable manufacturing, over 1,500 blades from Hull have been delivered to customers worldwide. We’re very much looking forward to adding to this capacity in the future.”

Currently in the midst of the Hornsea Two build-out, all eyes have been on the Sofia project in the North East that will be a first deployment of the firm's 14MW turbine - a 75 per cent increase from the current level.

Clark MacFarlane, UK managing director, said: “Our investment in our existing offshore blade factory, logistics, and harbour facilities in Hull has been a key driver of the growth of the UK’s world-leading offshore wind industry. We are proud to commit our long-term future in Hull and the Humber, providing safe, clean-energy workplaces which also contribute to the decarbonisation of the UK’s energy supply. As we work towards unlocking the potential of wind power, we applaud the UK Government’s strong and consistent support for offshore wind.”

RWE and Tata Steel have committed to work together to support the delivery of floating wind structu...