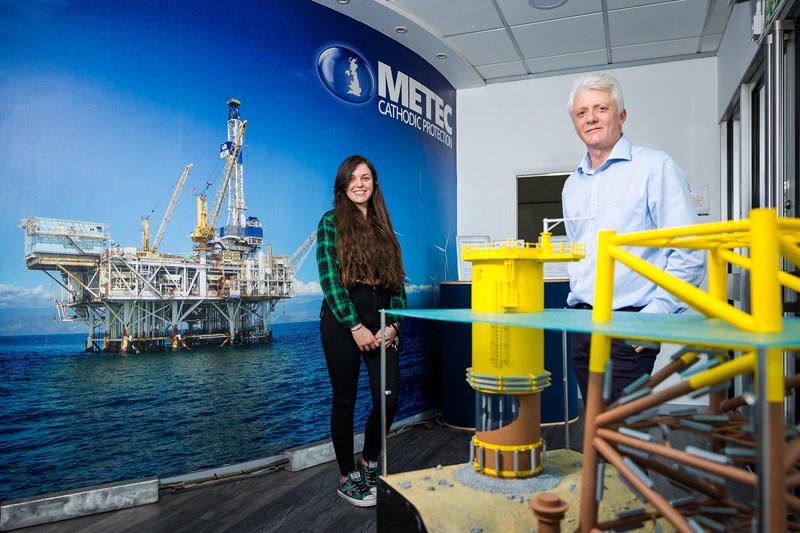 South Tyneside-based Metec UK has won a series of offshore renewables contracts worth over £6.5 million to supply the Dogger Bank Wind Farm phases A and B, and a second offshore substation in France amongst others.

Metec UK manufactures sacrificial anodes for the long-term protection of steel jackets and foundations against corrosion used in the offshore renewable energy industry.

The fast-growing company secured two six figure sum French renewables contracts in 2021 for two offshore substations, along with two multi-million pound contracts awarded by Smulders for the Dogger Bank Wind Farm. When complete, Dogger Bank will become the largest offshore wind farm in the world. Other contract wins include cathodic protection for port and harbour works linked to the push for renewable energy generation offshore.

The operations and maintenance base for Dogger Bank, being built at the Port of Tyne, will be the main hub for the wind farm, which will eventually be capable of powering 6 million homes. The wind farm has already created or supported thousands of new jobs and will be built in three phases, Dogger Bank A, B and C.

Metec's latest success follows hot on the heels of a number of contracts wins in December 2020 - one off the coast of Scotland and two offshore substation jackets off the coast of France and Holland - playing a large part in helping to reduce CO2 emissions and produce more than 1500 MW of clean renewable energy.

Established just four years ago, Metec UK, which has manufacturing facilities in South Shields and Tunisia with representation around the globe, is a leading manufacturer of corrosion protection for high value subsea assets. Initially employing just six people, the company now has 45 people within its business.

Turnover has increased from £5.2million in its first year to £8.6million in 2020, and with a host of new projects in the pipeline, the company will see revenue growth exceed its original target of 5-7% for the year 2020/2021.

With an initial investment in 2016 from its Italian owners, Metec UK and the Group has strengthened its position in the market and strategically positions the business to support the renewable energy transition within Europe and the UK.

Alberto Via, UK Managing Director, said: "These latest successes - and in particular the flagship Dogger Bank Wind Farm contract - justifies our commitment to South Tyneside, the North East and the UK. Our success demonstrates our ability to support large, important and prestigious renewable energy projects of this nature throughout the UK and Europe.

"We have the capacity, capability and expertise at Metec that places us right at the heart of where we need to be in an industry which is set to see significant growth and investment over the next 10 years.

"As a young, ambitious and expanding company, which has invested over £4million in premises and furnaces since 2017, we expect to see further growth throughout 2021. We are in this for the long term and we're very excited for the future of Metec and the industry as a whole."

Graeme Crow, Sales/Commercial Manager at Metec, said: "We're delighted to win these latest contracts and to be at the forefront of one of the great success stories for our region and industry. It's great news for South Tyneside, the North East and the UK.

"These contract wins mean we will continue to be a key player in the renewables industry in the UK and across Europe. In particular, significant investment in other offshore wind projects and developments at the Port of Tyne and many other ports and harbours around the UK and Ireland over the next decade will lead to many more tremendous opportunities for Metec. Business is good - we continue to grow rapidly and we're looking forward to a very bright future."

Halfdan Brustad, Vice President for Dogger Bank at Equinor, said: "As we build up our operations in South Tyneside it's great to see a local company not only win this flagship contract with the world's biggest offshore wind farm, but also exporting to other countries. With ambitious targets to quadruple UK capacity in the next decade, the offshore wind industry provides billions of pounds of supply chain opportunities, and in supporting UK companies we will also build up a competitive supply chain that can win international contracts. We look forward to continuing to work with UK companies, particularly in northern England where we will operate the wind farm for decades to come."