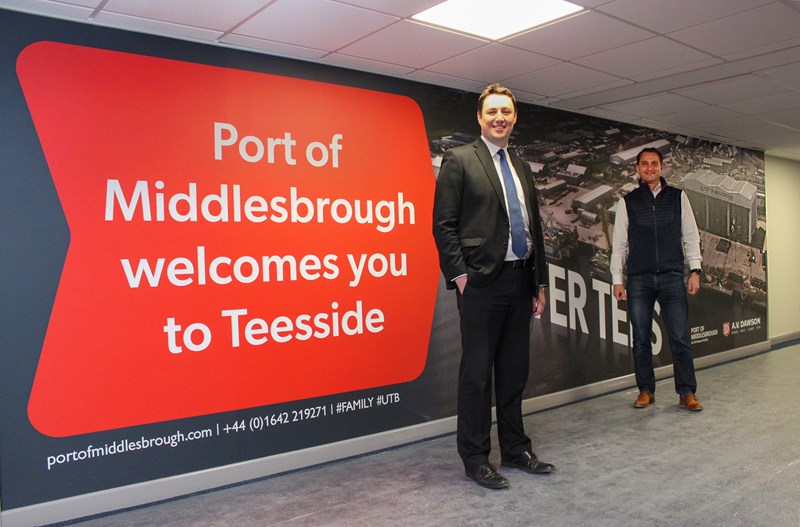 AV Dawson is further cementing its commitment to growth and regeneration on Teesside by partnering with Teesside International Airport.

After the recent rebrand of its Middlesbrough base to Port of Middlesbrough and the launch of a £10 million investment plan in its facilities, AV Dawson is supporting Teesside International Airport’s own multi million-pound facelift.

AV Dawson Joins a growing number of businesses investing in the regional airport. Arrivals to the airport will now be welcomed by a huge Port of Middlesbrough banner welcoming passengers to Teesside.

Speaking at the unveiling of the new 7 metre banner, Gary Dawson, managing director of AV Dawson said. “I believe the airport and Teesside more widely have an exciting future ahead and what a great moment it is to get involved. With the announcement of the Teesside Freeport and a huge amount of development on the river, the opportunities for businesses in the area are better right now than they have ever been before.

“We wanted to do something in the airport that would really stand out and convey a warm Teesside welcome to those coming into the region. As one of the oldest family businesses in the region, with our roots deeply engrained in Teesside, we are incredibly proud of our area. Its therefore fantastic to have Port of Middlesbrough at the centre of the airport development.

“Our two organisations share many synergies – clearly they are both ports, albeit one sea and one air. We wanted to invest in the future of our airport because we see it as a vital cog in the generation of inward investment and the future prosperity of our region.”

After the airport was saved from closure in 2019, it has gone from strength to strength. Currently undergoing a multi-million-pound refurbishment, the airport terminal is set for a dramatic transformation with new departure lounges, bars, duty free, baggage drop and security. As part of the winning Teesside Freeport bid the airport will progress with the redevelopment of 270 acres of surrounding land to include logistics, manufacturing, and commercial space. The airport has also managed to attract low-cost carrier Ryanair and further commitment from Eastern Airways, Loganair and KLM.

Tees Valley Mayor Ben Houchen said “It’s fantastic to have such an amazing local business, like the Port of Middlesbrough, backing our airport.

“A big part of my plan for jobs, a plan that is creating thousands of good-quality, well-paid jobs right across Teesside, Darlington and Hartlepool is to make sure we link the River Tees to our airport - creating an unrivalled offering for investors in road, rail, sea and air.

“There is no better example of this link than the Teesside Freeport, which the Port of Middlesbrough is part of, and which will create 18,000 local jobs for local workers over the next 5-years, putting more money in the pockets of local workers and their families.

“This year we celebrate our airports 80th birthday, rather than commiserate its closure and what better way to celebrate than with one of the oldest family businesses in the region yet again backing our airport.”