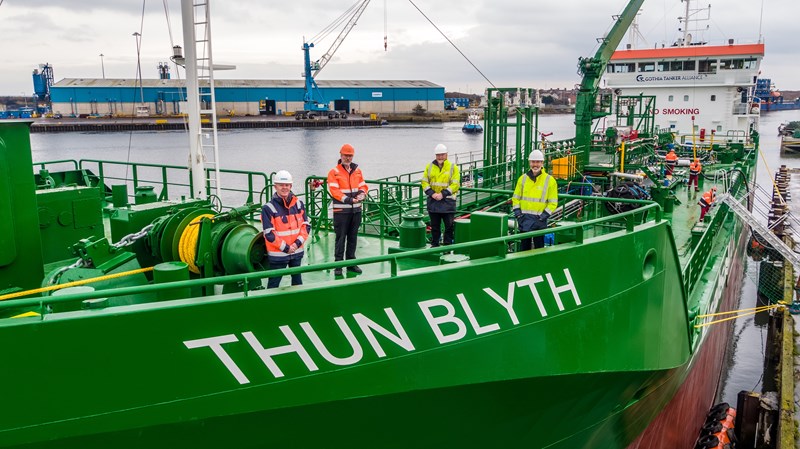 Port of Blyth and its tenant GEOS Group, the UK's largest independent marine fuel supplier, have been celebrating the arrival of the firm’s latest vessel on its maiden voyage as the company sets its sights on further growth.

Named in honour of the GEOS Group’s base at the Northumberland port, the Thun Blyth is a 4250mt product tanker and will be added to the company’s fleet, alongside the Thun Grace, to assist in supplying their current terminals throughout the UK as well as other third party facilities and support additional operations such as ship-to-ship.

Martin Lawlor, Chief Executive of Port of Blyth, said: “Receiving any vessel on its maiden voyage is a memorable occasion but to receive a vessel named after the town and the port is extra special. GEOS Group’s long term lease arrangement in relation to the Thun Blyth highlights the positive prospects of both the company and their base here. We’re delighted to continue our positive relationship with GEOS Group and look forward to supporting them to prosper in the future.”

Built for Thun Tankers AB of Sweden by Ferus Smit, the vessel was officially launched at their shipyard in Leer in Germany in August and is the first vessel in Thun’s fleet to be built with ”NAABSA” design (Not Always Afloat But Safely Aground).

During the design and build process, care was taken to maximize the vessel’s cargo intake and increase in-port performance; whilst prioritising resource efficiency, new regulations and environmental care.

Barry Newton, CEO of GEOS Group, said: “We are very proud and excited to be part of this NAABSA project and believe the MT Thun Blyth is setting a new standard for UK shipping within this class of vessel providing a valuable and necessary addition to our current tonnage. To be able to name the vessel was an honour and we feel the name reflects the importance that the town and port of Blyth has had and continues to have on our own development.”

GEOS Group’s facility at the Port of Blyth is on the Bates Terminal site, which is currently going through a £3m redevelopment programme with the addition of second heavy lift quay, 1km of new roadways for improved access and 4HA of development land being remediated. The works are due for completion by the end of the year.

Regarded as one of the UK’s leading offshore energy support bases, Port of Blyth is home to some of the world’s largest offshore and renewable energy firms and the GEOS facility is an important part of the Port’s offering.