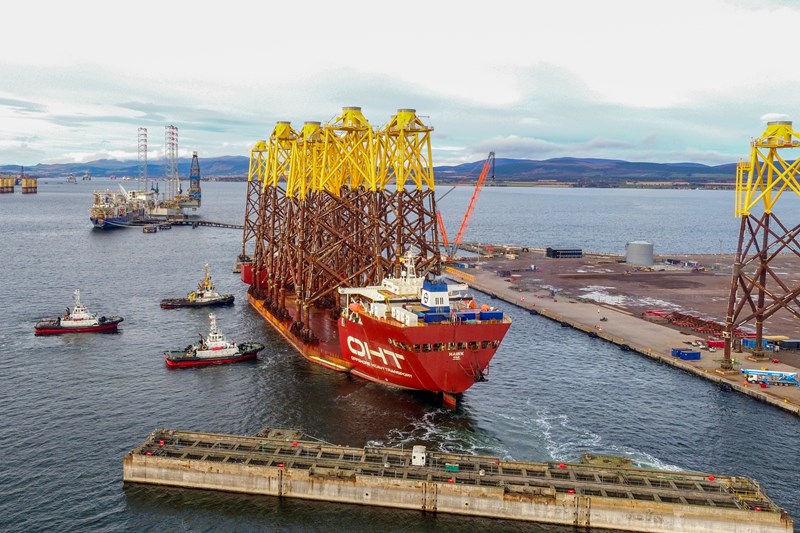 OHT’s heavy transportation vessel carried her second load of ten jackets from Lamprell’s fabrication site in Hamriyah, UAE, arriving at the Port of Nigg in the Cromarty Firth on November 12th.

This marks the completion of OHT’s eight-month transportation campaign which also utilised their vessels MV Osprey and MV Albatross. The company transported a total of 48 three-legged jacket foundations averaging more than 1,000 tonnes and up to 80 metres in height.

OHT were contracted by DEME Offshore, the project’s balance of plant EPCI contractor, in September 2019.

‘It has been a pleasure to work closely with DEME Offshore, as well as the excellent team at Global Energy and the Port of Nigg. The operation has been smooth and incident free, thanks to the experienced crew on board, and the excellent coordination by DEME and all involved’ said load master, Yegor Khodursky.

‘The jacket foundations are amongst the largest in deployment for offshore wind turbines. We are immensely proud to have played a key role in delivering such a critical component for this remarkable offshore wind project.’ said OHT’s Project Manager, Egil Ismar.

Once complete, Moray Offshore Windfarm (East) Ltd (known as ‘Moray East’) will consist of 100 V164 – 9.5MW turbines and will generate sufficient electricity to save 1.4 million tonnes CO₂ equivalent annually. Power will be generated at the lowest cost of any new renewable generation.