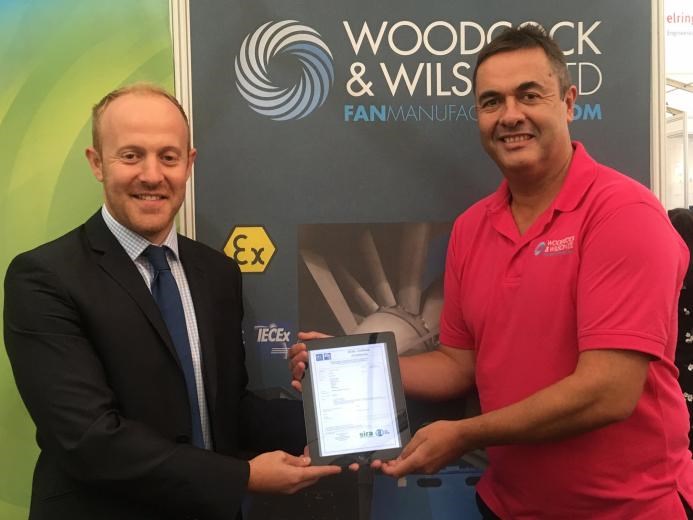 e-tech talked to Scott Harding, Sales Director and Joint Owner of Woodcock & Wilson, one of the world’s leading industrial fan manufacturers, on ATEX and IECEx certification for industrial fans.

Proper ventilation is a must for almost all industrial facilities not only to protect the health and safety of their employees but also to provide temperature control and mitigate the risks of fire.

And this is of particular importance in explosive (Ex) environments.

Power generation, oil and gas, mining, metal manufacturing and processing, petrochemical, food processing, automotive are some of the sectors that use industrial fans for ventilation, aeration, exhaust, cooling, air cleaning and drying and much more. Gyms, warehouses, and underground parking garages are also among those requiring industrial fans to ensure the health and safety of those using the facilities.

The main function of industrial fans is to provide a large flow of air or gas to various parts of buildings or other structures.

In September 2019, IECEx, the IEC System for Certification to Standards Relating to Equipment for Use in Explosive Atmospheres, certified Woodcock & Wilson, for its range of industrial fans. This is the first fan manufacturer to obtain IECEx non-electrical certification for its centrifugal and axial fans.

To meet the demands of major players in the oil and gas sector, the decision was made to look at IECEx certification when in 2016, the System announced that it had begun to issue certificates for non-electrical (mechanical) Ex equipment.

The company applied for its first IECEx certificate in 2017, one year after the publication of ISO 80079-36 and ISO 80079-37, two international standards issued by IEC Subcommittee 31M: Non-electrical equipment and protective systems for explosive atmospheres.

Harding explains that the majority of their work is for oil and gas, petrochemicals and pharmaceuticals. He adds that about 75% of their work is ATEX. Any manufacturing that involves equipment used in hazardous areas has a fan and ATEX has a standard, EN 14986, for the design of fans working in potentially explosive atmospheres. The company is also on the CEN Technical Committee responsible for the standard. And, most importantly, is one of the only fan manufacturers that provides third party ATEX certification.

The ATEX Directive 2014/34/EU covers equipment and protective systems intended for use in potentially explosive (Ex) atmospheres. The directive, mandatory within the European Union, defines the essential health and safety requirements and conformity assessment procedures to be applied before Ex products can be sold in the EU or internationally.

Under ATEX, manufacturers are allowed to self-certify their products. However, self-certification is not without risks: Harding explains that “it can become a ‘race to the bottom’ with commercial pressures leading to the cutting of corners with regard to construction and adherence to specifications.” He adds that “Woodcock & Wilson is different from its competitors in that all its products have third-party certification, thus avoiding potential technical fails. Product safety has to be the responsibility of the manufacturer.

End-users should not be made to take risks and pay the price of potential malfunctions. According to Harding, “ATEX is basically a good product but, because of its minimal legal requirements, it can be misused by manufacturers hoping to cut costs and speed up market roll-out.”

Harding says that going to IECEx certification has raised some issues: for instance when people, who have an ATEX-certified fan with an IECEx-certified motor, claim that their equipment has full IECEx certification. They don’t realize that IECEx now certifies non-electrical (mechanical) equipment in compliance with international standards. “This means that we have to educate people to make sure they understand the whole process.”

“There is a definite interest in IECEx but the problem is the disconnect between manufacturers, engineering procurement and construction (EPC) end-users and our products. Our competitors sometimes manage to convince their potential customers, who don’t know better, that IECEx certification for non-electrical products is not available, and they win the bid.

They claim their products are safe and comply with the relevant standards but all they’re after is to win projects over safety. Industrial fans are very unique as mechanical products, classified as ‘safety critical’. And of course, forgoing independent inspection may put end-users at risk – they don’t realize the product they buy may be flawed.”

“Cost may be an issue for some,” says Harding. “It may cost four or five percent more to have IECEx certification but, while having IECEx certification may seem more expensive, people don’t realize that, in the end, the price to pay is much less than what they thought. They need to have only one test and one certificate, accepted everywhere, thus eliminating the financial burden of additional testing.

IECEx certification provides confidence that the equipment is built in compliance with IEC International Standards, and consequently increased security and safety in all types of Ex areas. In addition, the United Nations, through the UN Economic Commission for Europe (UNECE), has endorsed IECEx as the internationally recognized certification system for promoting the safety of equipment, services and personnel associated with devices, systems and installations used in explosive areas.” To sum up, with IECEx there is no doubt that the equipment has been independently certified using best practice in accordance with international standards.

For Harding the main issue is risk awareness. And that can only be addressed through an educational process. To that end, Harding takes every opportunity to introduce IECEx in his presentations to companies and explain how the System brings product and equipment safety and confidence to a higher level. People have to know what their options are when they have to decide to go with ATEX or IECEx.

“It gives a level of authority, of understanding true safety products. Our big problem is that the majority of industry still doesn’t realize there are mechanical standards. ATEX was in the late 1990s and it’s almost 23 years and I gave lots of presentations about ATEX and now it’s ATEX and IECEx to a number of engineers and inspectors who actually don’t understand there’s a mechanical side to it”.

Scott Harding, who has worked in the fan sector for 27 years, joined Woodcock & Wilson eight years ago as Sales Manager. He was later promoted to Sales Director and since December 2019, he has become a joint owner of the company after a management buyout from the previous owner. His background is in business management, specializing in design concepts and speed of manufacture for assembly and products.