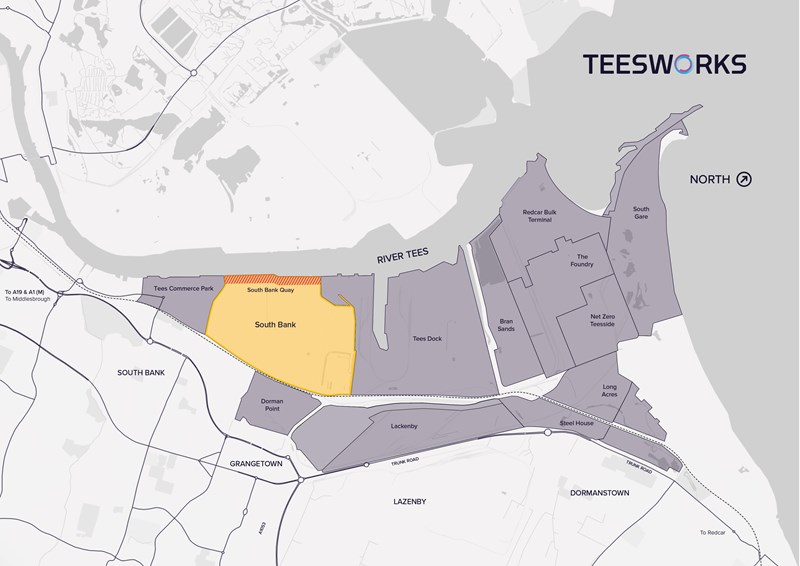 Planning permission has been granted for the 4.5million sq ft of state-of-the-art manufacturing space on the site of the former SSI steelworks in Redcar, which will also create 1,000 construction jobs during the eight-year build programme.

The development will see more than 430 acres of land alongside the River Tees remediated and developed into a world-class manufacturing zone that could welcome its first tenants as soon as 2022.

The announcement comes just weeks after Mayor Houchen set out his plans for a 1.3km state-of-the-art £90million quay at Teesworks, which will support the new offshore wind manufacturing site. The development will give a massive boost to the economy, adding up to an extra £180million per year once fully up and running.

It also comes as a further 30 jobs are set to be created with the latest phase of remediating works on a 50-acre site adjacent to South Bank. The land is now being primed for investment and is earmarked to be one of the first areas for development.

The initial phase of site clearance and advanced demolition was completed on schedule at the start of October. The contract for the £4million project has been awarded to Hall Construction, as part of Mayor Ben Houchen’s commitment to create local jobs by giving these opportunities to local businesses.

Mayor Houchen said: “I’m delighted these game-changing plans have been approved. This is one of the biggest planning applications in the North of England and it will see a key part of the Teesworks site, that’s three times larger than the Amazon facility in Darlington, brought back to life.

“Teesside is already leading the way for the rest of the UK to follow with our clean energy plans, but this takes us to the next stage. This space will be used to manufacture offshore wind turbines, and the new heavy lifting quay we announced last month will give ships and international firms easy access to be able to transport not only these turbines, but also all the other exciting projects and businesses that will be located on site.

“Redevelopment of the Teesworks site is a critical part of my plan for jobs, and already 557 local people from across Teesside, Darlington and Hartlepool are working onsite, including former steelworkers who until recently were working as contractors around the country, now they are back working close to home and putting more money in their pocket for them and their families.

“These are exciting times at Teesworks with a hive of activity, local workers returning to site and contracts being awarded to local firms. With the right plan, we are turning the site into a real hive of activity that people can be proud of again.”

Plans for the 4.5 million sq ft development were formally announced in July 2020, just weeks before Mayor Houchen set out his vision of a 12-month programme to demolish to deliver that would create 775 good-quality, well paid jobs on the site through 19 major demolitions across the Teesworks site, helping to prepare land for investors, creating hundreds of local jobs in the process.

Leader of Redcar & Cleveland Borough Council, Mary Lanigan, said: “This is a major project at what is an industrial area of international importance and which has the potential to create thousands of high-quality jobs. It’s all about doing what it takes to ensure the potential of the Teesworks site is fulfilled and it is pleasing to see hard work by so many organisations and individuals starting to pay off.

“This is another key milestone at what would be an ideal manufacturing base – but there is still much to do and we must all keep working together to make this vision a reality.”

Webinar - An introduction to RWE's Sofia

This free webinar will provide a high level introduction to the project. Book your place today!