The pharmaceutical company is part of a global group which provides services across the drug life cycle; from drug discovery and development, to the manufacturing of drug substances and drug products.

In one particular production area, Piramal had previously installed a number of Zone 1 4x5ft fluorescent luminaires, but were experiencing insufficient light levels and issues with the fluorescent tubes being prone to degradation (meaning frequent maintenance was required). Any maintenance on the lighting would also require the area to have scaffold installed given the height of the ceiling and lack of access.

To try and combat these issues, Piramal reached the decision to upgrade to LED. Removing and replacing the old fittings however would present several challenges.

The existing 4x5ft fluorescent fittings had been built into a sealed, false ceiling, which caused complications with them being removed and installing the new luminaires. Piramal identified that the best, and most cost-effective solution, would be to strip out the control gear on the old fittings, retain the existing housing (to maintain the seal of the false sealing) and fit new, smaller LED fittings in their place. To do this, they would have to cut the back out of the existing housing and mount the new luminaires onto threaded rod that was suspended from above. The existing covers/diffusers could then be re-fitted to maintain the seal of the false ceilings.

Primarily designed to replace smaller 4ft fluorescent fittings, the luminaires were the perfect size to fit inside the existing ceiling void. With M6 and M8 threaded mounting holes on the back of the fittings, it meant they were compatible with the threaded rod being used and made the installation process simple.

Despite moving from a 5ft fluorescent fittings to 4ft LED, plus the fact the new luminaires were installed behind the diffuser of the old fitting, the amount of light they gave off was described as exceptional. Michael Nelson, Electrical Engineer at Piramal, commented, “It sounds a bit silly, but it’s actually uplifting being in the area now, because it’s comfortably bright. Before, the area seemed a bit gloomy.”

With employees working in the area for several hours a day, the increased light levels has dramatically improved working conditions.

All SPARTAN luminaires are designed to make maintenance as easy as possible. For Piramal though, access would still be an issue (due to the ceiling being sealed, and the new luminaires still being mounted behind a diffuser) which meant the reliability of the new fittings would be critical to ensuring maintenance costs could be reduced.

With all LED luminaires, the key to reliability is keeping the LEDs cool. Raytec’s SPARTAN Linear is designed with a bespoke housing made from a marine grade aluminium and uses a dedicated thermal management system to draw heat away from the LED’s. This keeps them cool and maximises lifetime and reliability.

Upgrading to LED has eradicated the need to re-lamp the fluorescent tubes, saving significant time and resources, as well as minimising disruption. Crucially, SPARTAN has also provided Piramal with the reliability they required. Michael tell us, “It would be hard to quantify how much it’s saved us in maintenance costs, but it would probably be more pertinent to say, it hasn’t actually cost us anything to maintain them since they were installed.”

“Since installing the Raytec fittings, we’ve not had one issue with lighting in that particular area. We haven’t had any of the new lights fail and they’ve continued to provide the level of lighting we require with no drop off in performance whatsoever.”

Replacing the 4x5ft fluorescent tubes which equated to approximately 230w per fitting, with 4ft LED fittings, also provided Piramal with an energy reduction of around 60%, all whilst providing a significant improvement in light levels.

It is estimated that the new fittings have saved Piramal approximately £3K per year in the two production rooms, but the upgrade to SPARTAN is an ongoing task across the site which will bring even greater savings as the upgrade continues.

With an estimate of well over 1000 zoned fluorescent fittings installed across the Morpeth site, there is huge scope to make further energy savings. Piramal have already used Raytec fittings in a number of areas and will continue to replace old fluorescent fittings with Raytec’s LED SPARTAN Linear range. This involves a focussed effort in a few areas by tackling one area at a time.

Despite some of the challenges of replacing the existing fittings, choosing SPARTAN has allowed Piramal to upgrade their old fluorescent fittings to LED with relative ease, transforming the working conditions for those on site and significantly reducing ongoing running costs.

Michael concluded, “We are continually impressed by the quality of the light fittings themselves and also the performance. The customer service we receive from Raytec is always second to none.”

“Raytec are our go to manufacturer for Hazardous Area lighting. We’re continually pleased with the reliability and quality of the lights we now have. We also like that Raytec are a local business and we like to support local industry where we can.” 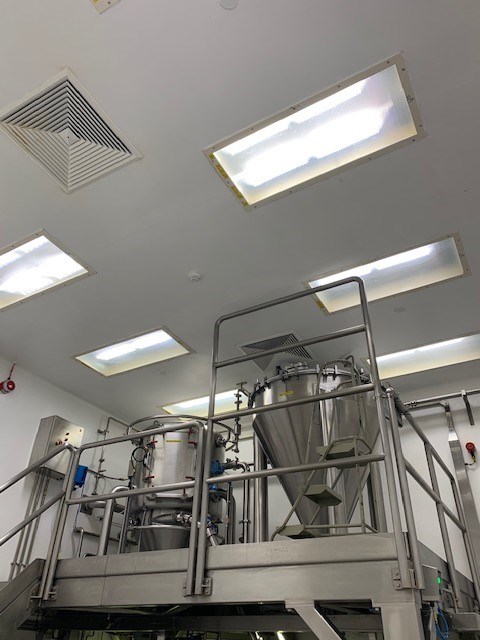