Port of Blyth has announced the completion of its largest oil and gas decommissioning project to date.

Working alongside Maersk Decom, who together with Maersk Supply Service has been project managing the removal, recycling and waste management of subsea infrastructure for Perenco’s Thames field in the UK North Sea, a number of sizeable wellheads and wellhead protection structures were delivered to Blyth in August.

Dismantling and downsizing of the recovered structures took place at the port’s dedicated facility at its Battleship Wharf terminal and follows on from several smaller projects and the recent removal and decommissioning of two 2-megawatt turbines owned by EON. Located off Blyth, the turbines were the UK’s first offshore wind farm and having reached the end of their technical lifespan, in another first for the sector were the first offshore turbines in UK waters to be decommissioned earlier this year.

Martin Lawlor, Chief Executive of Port of Blyth, said: “Successfully completing this project on time and on budget alongside major partners in Maersk Decom and Maersk Supply Service is very satisfying. It further proves the viability of our fully licenced decom facility and thanks to our enviable mid-North Sea location gives us an opportunity to position ourselves as a major player as decommissioning in the sector ramps up over the coming months and years.”

Home to some of the world largest offshore and renewable energy firms, the Port is regarded as one of the UK’s leading offshore energy support bases. The designated 2.3ha decom site is licenced to handle up to 50,000 tonnes of offshore energy materials per year, with the port likely to focus on small to medium sized projects and pieces up to 4000 tonnes in response to demand. 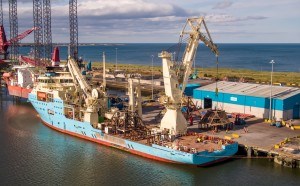