Wilton Engineering welcomed His Royal Highness The Duke of Gloucester KG GCVO to its Port Clarence Offshore Base on Teesside to celebrate the company’s 25th anniversary.

During the visit His Royal Highness was given a tour of the 54-acre facility on the banks of the River Tees, meeting Wilton’s workforce and unveiling a plaque to mark the company’s milestone.

On arrival, the Duke was greeted by pupils from nearby High Clarence Primary School waving Union flags and will meet local dignitaries, Wilton directors led by Chief Executive Bill Scott OBE and representatives of the workforce.

On his tour of the Port Clarence facility His Royal Highness saw some of the UK’s largest production halls where Wilton fabricates complex steel structures, including those occupied by its sister company, Universal Coatings, and some of the projects the company is currently undertaking.

In addition to marking the company’s silver anniversary, Wilton also recognised the achievements of its longest serving employee, Graham Brynn.  Graham, who joined the business in 1994 as its first apprentice is now its Construction Manager and was presented with a special award in recognition of his long service.

Wilton CEO Bill Scott OBE said: “We are exceptionally honoured to welcome His Royal Highness The Duke of Gloucester to Wilton as part of our 25th anniversary celebrations. Everyone involved in the business is very proud of the achievements we have made, establishing ourselves in the oil & gas sector and subsequently successfully diversifying into the offshore wind industry.

“It is testament to the dedication, tenacity and commitment of each and everyone who has worked for the company, in the past and present, and played a part in our growth developing a positive culture for the business, which is an essential part of everything we do.”

Graham Brynn said: “From the first day I joined Wilton as an apprentice I have learned something new and developed skills that have helped me which I have then been able to pass onto to the benefit of others throughout my career with the company.  I am immensely proud to have been at Wilton from the very beginning and to be part of these celebrations.” 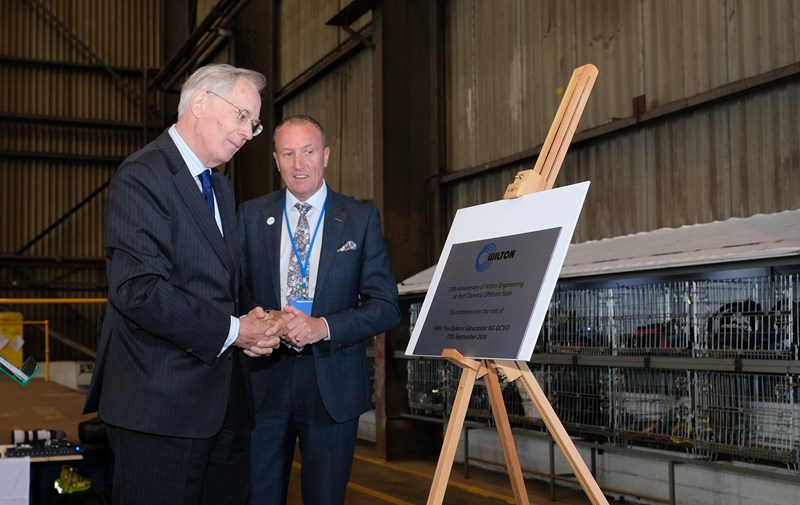