A new £4 million cross-sector innovation project is set to develop the world’s first fully autonomous robotic inspection and repair solution for offshore wind farms, which is expected to save the average wind farm approximately £26 million over the course of its lifetime.

The Innovate UK-funded MIMRee (Multi-Platform Inspection, Maintenance and Repair in Extreme Environments) is an ambitious two-year project bringing in expertise from the fields of robotics, non-destructive testing, artificial intelligence, space mission planning, marine and aerial engineering and nanobiotechnology. It aims to prove that offshore wind operations and maintenance missions can be conducted by autonomous vessels, aerial vehicles and crawling robots.

Inspection and repair missions on wind turbine blades are typically performed by rope-access technicians, often working in extreme conditions and during restricted weather windows. The length of turbine downtime, and hence lost energy production, using this approach is high, while daily use of crew transfer vessels makes up a significant proportion of a wind farm’s operation and maintenance costs.

Eight industry and academic partners will work together on this game-changing new system that will build on their own existing innovations. Plant Integrity will lead the consortium and the Offshore Renewable Energy (ORE) Catapult will provide offshore wind industry insight, engineering expertise and access to facilities to test and demonstrate the MIMRee system.

Thales’ Halcyon autonomous vessel will play a key role, as will a drone system under development by the University of Bristol’s Dr Tom Richardson, and the six-legged crawling repair robot BladeBUG, invented by entrepreneur Chris Cieslak. The core innovation challenge will be to bring these units into one team capable of planning, communicating, sharing data and working together on a complex chain of tasks.

The University of Manchester’s Dr Simon Watson will lead development of a system for transporting, deploying and retrieving the blade crawler whilst Dr Sara Bernardini of Royal Holloway University of London will lead creation of the human-machine interface that will allow personnel located onshore to analyse the data transmitted by MIMRee and intervene as necessary.

Dr Bernardini said: “We will be working closely with a group of offshore wind technicians to create personas for the robots and map the tasks that will turn a human-led mission into an autonomous operation. Testing and consultation with technicians will be crucial to designing the interface for remote monitoring and intervention and understanding how to deal with the unexpected in a mission.”

If successful, future offshore wind farm inspections and repairs will look very different from those of today. Autonomous vessels will be initiating and planning missions, and mapping and scanning wind turbine blades upon approach to understand where the robots should be deployed.

On-board drones will take off from the mothership to conduct visual and hyperspectral imaging inspection of the blades and transport crawling robots on to the blade to effect repairs using an innovative robotic arm for resurfacing the blades (created bespoke by Dr Sina Sareh’s team at the Royal College of Art Robotics Laboratory). An electronic skin, developed by high-tech start-up Wootzano, will ‘feel’ the surface and collect a deeper level of data on the blade surface structure.

Martin Bourton, Principal Project Leader at Plant Integrity, added: “The moment when an autonomous mothership and robotic crew sail in UK waters will be a world-first – and likely a game-changer for the offshore, oil and gas and defence industries too. Some of the technologies are more fully-developed, such as the autonomous vessel, but robotics is at a more experimental stage. While the focus is on solving vital problems for the offshore wind industry, we’d expect to see a lot more insights and applications emerging as we test different combinations of mechanics, sensors and robotic intelligence.”

Chris Hill, ORE Catapult’s Operational Performance Director, also commented: “This project aligns closely with the UK Government’s latest Offshore Wind Sector Deal and wider Industrial Strategy and will position the UK as a world leader in robotics and autonomous systems development, as well as highlighting a route to market for innovators in robotics, data and digitalisation services.

“Reducing the use of crew transfer vessels is an imperative for the offshore wind industry, as it will positively impact health and safety, help push down cost and combine the UK’s competitive advantage in operating offshore renewable energy plant with its world-leading robotics sector”. 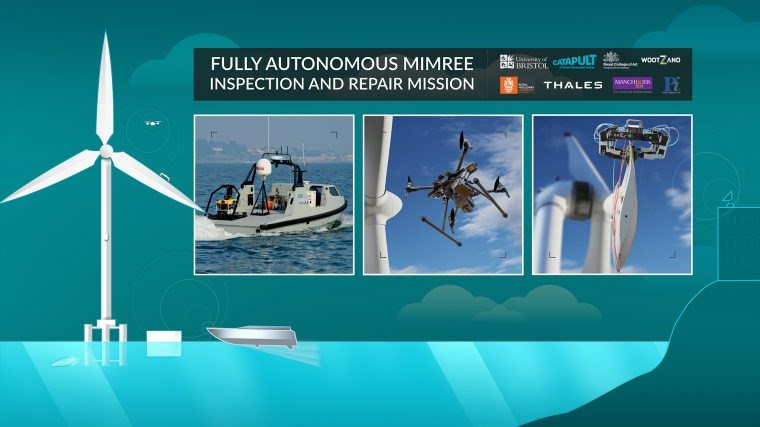