Express delivery at the Port of Tyne

It was an Express Delivery at the Port of Tyne recently, when five fully-finished Transpennine Express train carriages arrived into Port from Kobe, Japan.

Built in Japan, Hitachi is using its bullet train technology to make the new Transpennine fleet light and aerodynamic.

Weighing 50.4 tonnes each, the carriages arrived at Port of Tyne on-board the Höegh Antwerp, and will be stored at the Port’s secure Tyne Dock estate before continuing on their journey to Hitachi Rail Europe in Newton Aycliffe.

Complex cargo planning enabled the train carriages to be quickly and efficiently discharged in less than one hour.

Adam Smallridge, Quality Manager at NSA based at the Port of Tyne, said: “The train carriages were double the weight of those we usually handle due to being fully-finished. As always, we had a plan of action in place, resulting in a swift and efficient discharge.”

Nolan Gray, Business Development Director at the Port of Tyne, said: “This is a demonstration of how efficiently the Port handle complex high and heavy cargoes at Tyne Car Terminal. Through our partnership with NSA, the Port of Tyne acts as a strategic import hub for the Hitachi Rail Europe plant in Newton Aycliffe, Durham.

“Increased RoRo capacity in regular shipping services connected to the Port of Tyne offers businesses looking to streamline their supply chain a more efficient, reliable and cost-effective way to connect to global markets.”

From 2019, the new generation Transpennine Express fleet will connect major cities in the North of England and Scotland. 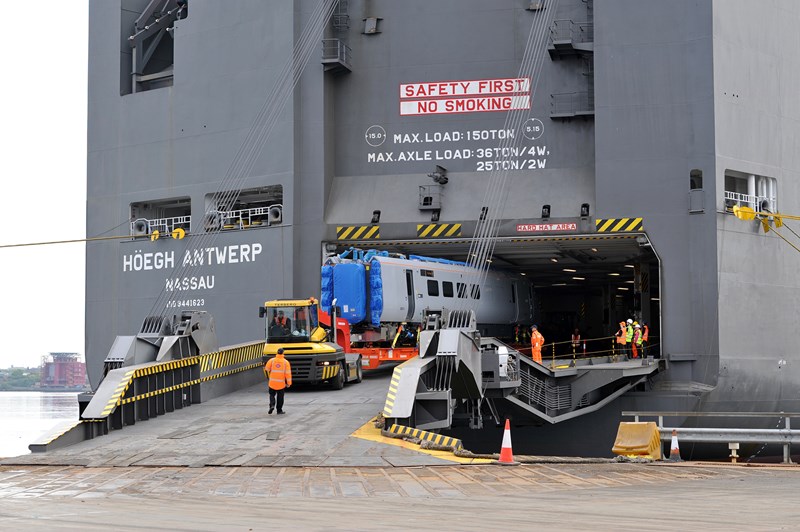